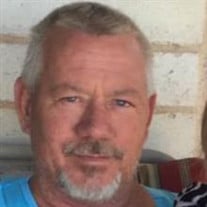 Aaron Franklin Wall was born on March 18, 1960 in Houston, Texas to Bennie Franklin Wall and Elizabeth Isabell Jameson. On July 8, 2021, AWOL, as he was lovingly called by many friends and family, turned off the lights, locked the gate, and departed the facility. Aaron spent his childhood in the Houston area surrounded by older half brothers and sisters, cousins, aunts and uncles. After receiving his GED, Aaron attended Texas State Technical College in Waco and Eastfield College in Mesquite. Aaron's career with the Dallas Transit System, later renamed Dallas Area Rapid Transit (DART), spanned more than 35 years. He was a facility manager at various locations, primarily at the East Dallas Facility. If it needed to be fixed, moved or replaced, you knew to call Aaron. He always got the job done! He was a skilled electrician, plumber and HVAC specialist. He was highly regarded and respected in the DART community for his knowledge of the system, for his dependable response and ability to solve problems. Aaron retired from DART in 2017, but remained in close contact with his DART family. Following retirement, Aaron joined his wife and daughter to reside in Early, Texas. Aaron was truly a father to his daughters. At the young age of 22 following the death of his first wife, Maggie, Aaron found himself the single father of two baby girls, Brandi, 18 months old, and Erin, six months old. Aaron took the responsibility seriously. From then forward until they were grown, Aaron was the primary care giver, teacher, and protector of his girls. Many years later when daughter Alyssa was born to a much older and wiser father, she became the apple of his eye following him everywhere. As a child she once told her granny, "You're pretty smart, but my dad knows everything!" Aaron was an avid hunter and keen fisherman. He loved the outdoors, riding his Harley, drinking beer and telling lies around the campfire. Aaron especially loved youth sports. He spent countless hours watching and coaching Erin's softball teams. Even though he did not have sons, he worked tirelessly coaching and serving as referee for young men's baseball and basketball teams in the Kemp, Eustace, and Mesquite leagues. Aaron coached grandsons, Austin and Tyler, and other little league teams in Mesquite for several more years. Fun times and lasting friendships were formed. Aaron was preceded by his parents, his first wife Maggie, many extended family members and special friends, Dean Samples and W.B. Johnson. Left to cherish his memory are his wife, Stacye Boler Wall and daughter, Alyssa Raye Wall of Early, daughter Erin Beth Powell (Don) and granddaughter Olivia Powell of Crandall, daughter Brandi Hughey of Missouri, and grandsons, Austin Bryant (Andie), Tyler Bryant, and great granddaughter, Calliope Bryant, step daughter, Brittani Springs, and granddaughter, Zoe Raye Springs, raised-as-his-own daughter, Brianna, and Lindsey and her girls, Lily, Chloe and Haisley, in laws, Ray and Alice Boler, Stan and Tamy Boler, niece Angel Wall, cousin James Jameson, special friends, Richard Horton, Len and Wanda Eubanks, Ed and Judy Young, Kevin (Lisa) and Jason Calloway, as well as a host of loving family members and friends. Ride on, AWOL, you will be missed!!

Aaron Franklin Wall was born on March 18, 1960 in Houston, Texas to Bennie Franklin Wall and Elizabeth Isabell Jameson. On July 8, 2021, AWOL, as he was lovingly called by many friends and family, turned off the lights, locked the gate, and... View Obituary & Service Information

The family of Aaron Franklin Wall created this Life Tributes page to make it easy to share your memories.

Send flowers to the Wall family.