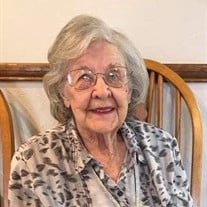 Aleta Muriel Chambers Coleman, age 98 of Brownwood passed away peacefully on Saturday, April 9, 2022. Aleta was born on Friday, June 29, 1923 in Burkett, Texas to Walter and Lelia Muriel Chambers. She graduated from Burkett High School and continued her education at Daniel Baker College. Aleta married Troy Marcel Coleman on November 16, 1946 in Coleman, and they began a life together that blessed them with two children. Aleta served as the Democratic Precinct Election Judge in Brown County for many years. She was also an active member of the Central United Methodist Church and United Methodist Women's group. Aleta was an avid reader, and enjoyed cooking and sewing for her family. Most of all Aleta cherished time with her children, grandchildren and great grandchildren. Aleta is survived by her daughters, Gail Taylor and husband Ronnie of May, Jodell Galloway and husband Robert of Granbury; 3 granddaughters, Merisha Parvis and husband Cliff of Brownwood, Marie Smith and husband Joe of Brownwood, and Megan Leger of Fort Worth; a grandson Marc Galloway and wife Amanda of South Lyon, MI; four great-grandchildren, Reeanna Grace, Nick Grace, Autumn Parvis and Landry Ross, all of Brownwood. She was preceded in death by her beloved husband Troy Marcel Coleman; father Walter R. Chambers; mother Lelia Muriel Chambers; two brothers and two sisters. In lieu of flowers the family requests that donations be made to: Central United Methodist Church, 1501 2nd Street, Brownwood, Texas 76801.

The family of Aleta M. Coleman created this Life Tributes page to make it easy to share your memories.

Send flowers to the Coleman family.