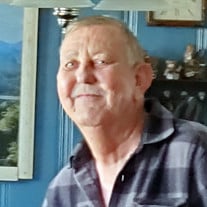 On Saturday, March 13,2021, after a battle with cancer, our beloved father and grandfather, Alton Richardson, went to be with the Lord. He will be laid to rest on Saturday March 20,2021 at 2:00 PM at Greenleaf Cemetery. Alton Richardson was born October 29, 1948, in Brownwood. After school he worked for years as a porter and foreman for Frost Bakery, at places like Howard Payne University and Burger King before he found a new career by being the Baker for Schlotzsky's, working for, and with his good friend Nelson Olivares, until he retired. Alton Richardson was a pool shark. He thought all his children and grandchildren to play pool Alton and Sherry Richardson his Daughter won pool tournament in Austin she came in first place he came in second they left with a big chunk of money... Alton is a wonderful father and Grandfather. He gave his life to his family he was a hard worker and a wonderful provider for his family he will be so missed please come out and bless our fathers passing. Alton leaves behind his sister Brenda and nephew Tony Day, as well as 4 sons, Alton Joe and wife Detia and two sons: and Tommie James Richardson, Charles Kendrick and wife Cynthia, and his 4 children, and Richard Tull and his 4 children and grandchildren. He also leaves his four daughters, Sherry Lynn Richardson and her children Christopher Smith, General Darrell Smith, Skye Lynn Smith, Tray Brian Smith, Rosalia Jacobs-Richardson and Tonya Joe Jacobs her seven children Jonnie Applin, Ashely Woodward, Christopher Smith, Brenda Jacobs, Alex Jacobs, Austin Jacobs, and grandchildren Jonathan Jacob, Harmony Jacob, Honey Jacob, by Rosalia and granddaughter Delilah by General Darrel, Tonya Jacobs, and Dee Sepata and husband Luis and her 4 children, as well as Cheryl Kendrick and her two children and two grandchildren as well and many friends that loved and cared for him. He was preceded in death by a brother Randall Richardson, sisters Sandra Day and April Day, his father Laurence Richardson, his mother Pauline Herman Richardson, son Wesley Kendrick, as well as his beloved wife Janette Richardson. Condolences, memories and tributes can be offered to the family online at heartlandfuneralhome.net

On Saturday, March 13,2021, after a battle with cancer, our beloved father and grandfather, Alton Richardson, went to be with the Lord. He will be laid to rest on Saturday March 20,2021 at 2:00 PM at Greenleaf Cemetery. Alton Richardson was... View Obituary & Service Information

The family of Alton Darell Richardson created this Life Tributes page to make it easy to share your memories.

Send flowers to the Richardson family.