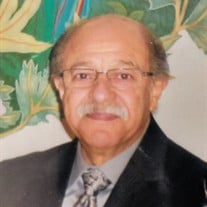 Alvino "Sonny" O. Aguilera, age 78 of Brownwood, Texas passed away peacefully at his home on Sunday, September 5, 2021. A Celebration of Life Service will be held 2pm on Saturday, October 2nd at the Heartland Funeral Home Chapel. Sonny was born on Sunday, December 13, 1942 in Pomona, California to Alvino and Clara Aguilera. He graduated from Bonita High School in La Verne, California, and went on to join the U.S. Navy in 1960. Sonny completed the U.S. Naval School in Great Lakes, Illinois for Machinists Mates and graduated in 1961. Alvino married Vicki Valencia in August of 1965, in La Verne, California and the two began a life together that blessed them with 3 children, Joseph, Deanne and Jennifer. Sonny worked in the aircraft industry for McDonald/Douglas in the 1960's. Sonny went on to complete a four year Graphic Arts Apprenticeship and school from 1970 to 1974 to become, a Journeyman Dot-Etcher. He then went on to work in the graphics industry for about 10 years before starting a Graphic Arts business partnership, where he served as president, and operated for over 20 years. After closing his graphics business, he went on to work for the financial industry before deciding to go train and work as an investigator for the State of California for twelve years before retiring in 2017. He and Vicki moved to Texas to be closer to family and friends. Sonny enjoyed hunting and fishing in his leisure time. Sonny is survived by his wife Vicki Aguilera of Brownwood; son Joseph Aguilera and wife Valerie of Pahrump, Nevada; 2 daughters, Deanne Burk and husband Richard of Richmond, Kentucky and Jennifer Smith and husband Andrew of Newport, California; brother Steven Aguilera and wife Susan of Pomona, California; and 9 grandchildren. He is preceded in death by his parents Alvino F. and Clara Aguilera; and granddaughter Brooke Nicole Watson.

Alvino "Sonny" O. Aguilera, age 78 of Brownwood, Texas passed away peacefully at his home on Sunday, September 5, 2021. A Celebration of Life Service will be held 2pm on Saturday, October 2nd at the Heartland Funeral Home Chapel. Sonny was... View Obituary & Service Information

The family of Alvino O. Aguilera created this Life Tributes page to make it easy to share your memories.

Send flowers to the Aguilera family.