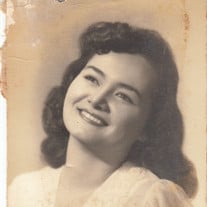 Amy Libby Roberson, 95, passed away on June 7, 2020. She was born on June 14th, 1924 in Honolulu, HI. Amy graduated from Kamehameha High School in Honolulu, HI, an elite, Hawaiian only institution that is one of the top schools in the nation. While a student there, she witnessed the historic bombing of Pearl Harbor on December 7, 1941. On February 2, 1945 she married Cpl. Wesley Roberson, Jr., USMC, in Honolulu HI. After her marriage, Amy worked for 5 years as a clerk typist for the Hawaii Electric Company. During the 18 years the Robersons resided in HI, they were blessed with three children. Amy loved taking them on picnics to Kailua Beach. In 1963, the Robersons moved to San Antonio, TX. They later lived in Natalia, Devine and Uvalde, TX respectively. Amy taught girls or youth Sunday School at every church they attended. She had a servant’s heart and often invited people over for supper or provided transportation to those in need. In December of 1970, the Robersons moved to Buena Vista, CO, where Wesley Jr. was the pastor of Mountain Heights Baptist Church. In June of 1973, Amy was widowed when Wesley Jr. was killed in a car accident. She was a devoted wife, mother and daughter. Following her mother’s debilitating stroke, Amy cared for her in CA and HI for two years. After her mother’s death, she lived in the beautiful Ozark mountains near Ava, MO for 29 years. She enjoyed keeping a vegetable garden, spending time with her eldest son and his family, playing board games, entertaining her many friends and cooking family luaus, sledding down hills in the winter snow, singing in the choir at Brushy Knob Community Church, and meeting weekly with her prayer circle. Amy’s latter years were spent living in the homes of her two children in Texas, where she enjoyed being around her grandchildren and great-grandchildren. Her final residence was at Senior Care of Brownwood, where she was dearly loved by both the staff and the other residents. All who knew her were blessed by her sweet and loving spirit. She laughed easily and always spoke encouraging, loving words to those around her. She loved to sing hymns and could remember the words of many of them even in her nineties. She lived out her faith in Christ with genuineness and consistency all her life, and through her final day on this earth. Amy is survived by son, Wesley Roberson III and wife Penny of Ava, MO, and their children Rick Roberson, John Wesley Roberson and Heather Headley; son, Preston Roberson and wife Pamela of Brownwood, TX, and their children Kimberly Harvey, Scott Roberson, and Jeremy Roberson; and daughter, Charlene White and husband Veldon of Bryan, TX, and their daughters Crystal Atkinson and Viki Weiman. She is also survived by sixteen great-grandchildren, five great, great-grandchildren and numerous nieces and nephews. Amy was preceded in death by: her father, Ralph Walter Miller, Sr.; her mother Phoebe Elizabeth (Keanini) Miller; her husband Wesley Roberson Jr.; her brothers Ralph Miller and Walter Miller; and her sisters Ellen Bloede, Gertrude Graves and Marjorie Steeves. Interment will be private at Fort Sam Houston National Cemetery in San Antonio, TX. A family time of reminiscence and reunion will be held in Amy’s honor in October 2020 in Brownwood, TX. Aloha, Mama, Grandma, Auntie, we will miss you!

Amy Libby Roberson, 95, passed away on June 7, 2020. She was born on June 14th, 1924 in Honolulu, HI. Amy graduated from Kamehameha High School in Honolulu, HI, an elite, Hawaiian only institution that is one of the top schools in the nation.... View Obituary & Service Information

The family of Amy Libby Roberson created this Life Tributes page to make it easy to share your memories.

Send flowers to the Roberson family.