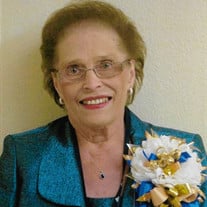 Elizabeth Ann Ricks Sheffield, 85, arrived in Glory to meet her Lord and Savior Jesus Christ on February 10, 2021.  Our beloved mother, grand “Mommy Ann”, great grandmother, sister, aunt, cousin, friend, and mentor was born on September 24, 1935 in Brady, Texas when her uncle Dr. Glenn Ricks delivered her into the hands of her parents Alwin James “A.J.” Ricks and Eva Virginia Harris Ricks.      Ann’s life-long passion was focused on children – serving as Kindergarten teacher for 16 years, Associate Professor of Early Childhood for 28 years, and owner CEO of Little Dude Ranch for 46 years.  Ann leaves a remarkable and lasting legacy which will continue to inspire her family, friends, colleagues and former students who will treasure many memories.       Ann grew up attending Brady schools where she enjoyed music, cheerleading, journalism and drama. In the Brady High School Band, she played bassoon and served as baton twirler and drum major her senior year. She married Buford Sheffield in 1953 and they both attended Baylor University where he played Baylor Bear football. In 1954 they returned to Brady where he began a ranching career. For the next 15 years, Ann traveled back and forth to Brownwood attending Howard Payne University, studying to be a teacher - her lifelong goal. It was during these years that their 5 children were born - Allen Ross in 1954, James Michael in 1957, Sharla Ann in 1961, Russell Glenn in 1965 and Carolyn Kay in 1966.     In 1968 the couple moved to Brownwood so Ann could finish her degree in Elementary Education. In 1970, after 17 years in pursuit of her first degree using a trusty Underwood typewriter, Dr. Guy D. Newman presented her with the long sought-after Bachelor of Science degree with honors. She completed an Early Childhood Education Certificate through Texas A&M University and was soon hired to be Brownwood’s first public school Kindergarten teacher, a role she loved for 8 years. Her next educational pursuit was studying at North Texas University, earning her Masters Degree in Early Childhood Education in 1974. Her Master’s thesis on the impact of child development led her in 1976 to open Stepping Stones private school for young children and Little Dude Ranch Child Development Center for pre-school children.      Honors included Howard Payne University’s Distinguished Service Award, Outstanding Young Women of America and Who’s Who of American Educators.     Since 1968, Mrs. Sheffield served her faith community, First Baptist Church Brownwood, in many leadership capacities. She was also a longtime member of Delta Kappa Gamma, Friends of Rotary, Brownwood Women’s Club, and Angels in Aprons.     As a People to People representative, she led groups of educators to Russia and South Africa to study early childhood practices. She also spent a summer in China with educators teaching at Hian University.     Ann enjoyed annual reunions with nine high school girlfriends from Brady and with her beloved Espy Cousins by the Dozens. She also loved to travel and entertain. Ann is survived by her children, Sharla Ann Sheffield McCarty (Don), Russell Glenn Sheffield (Jan), Carolyn Kay Sheffield Day, Misty Dawn Sheffield Huse, and Roberta Sheffield (daughter in law).  Her grandchildren are Lauren Sheffield Jurek (Jesse), Tyler McCarty (Bria), Kristen McCarty, Mallorie Maxwell, Jordan Sheffield, and Hayden Day.  Great Grandchildren are Ashley Huse, Brookelyn Huse, Riley McCarty, Bradey McCarty and Grant Pizzini.  Beloved Sister is Carol Ricks Bowman (Lee). Brother is David Ricks (Susan). She is also survived by many nephews, nieces, “Espy Cousins by the Dozens”, and her beloved lap dog Brady. Ann was preceded in death by her parents, her brother Bill Ricks, sons Mike Sheffield and Allen Sheffield, husband Buford Sheffield and son-in-law Mike Day.  In lieu of flowers, memorials can be made in memory of Ann to the First Baptist Church of Brownwood or to the Ann Sheffield Early Childhood Scholarship at Howard Payne University Early Childhood Education. Here is the link for our livestream: www.facebook.com/fbcbwd/live . The funeral for Ann Sheffield can be seen there. The live video from the announcement post is https://www.facebook.com/fbcbwd/posts/3871830516171801 and the funeral can also be viewed via that link as well.

The family of Ann Sheffield created this Life Tributes page to make it easy to share your memories.

Elizabeth Ann Ricks Sheffield, 85, arrived in Glory to meet her...

Send flowers to the Sheffield family.