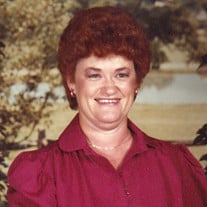 Annie Marie Pafford Shirley, 80, left us on November 6th, 2020 at her daughter’s home, in Early, Texas, with her family by her side. Annie Marie was born December 20th, 1939 in Mullin, Texas to Fred Oliver Pafford and Lillie Ilene Anderson Pafford, making her their third child. She graduated from Mullin ISD in 1958, after attending all 12 years there. While attending, her extracurricular activities included sports and homemaking. She went on to marry her high school sweetheart Richard Womack in 1959. Together they had three children: Ricky, Randy, and Tina. Annie received a nursing degree from Temple Junior College, and worked in the medical field for many years. She retired from nursing in 1981, after she remarried to W. D. “Bud” Shirley. The two of them resided in Early and were together until his death in 2009. In her retirement years, Annie was able to carry out her creativity through sewing, crocheting, and most prominently quilting. She won numerous awards and competitions for her quilts. She also loved to spend time cooking and canning, working in her vegetable and flower gardens, volunteering in her community, which included the Brown County Youth Fair, and spending time with her grandchildren. She was a 25 year member of Owens TEEA club. She is survived by her two sons, Ricky Womack and wife Melissa, Randy Womack and wife Cindy, daughter Tina Harris, 10 grandchildren, 5 great-grandchildren, sister-in-law Oleta Pafford, and numerous cousins, nieces, and nephews. She is preceded in death by her husband W. D. “Bud” Shirley, brother Eddie Pafford, sister Nita Pafford Cowan, and parents Fred and Ilene Pafford.

Annie Marie Pafford Shirley, 80, left us on November 6th, 2020 at her daughter&#8217;s home, in Early, Texas, with her family by her side. Annie Marie was born December 20th, 1939 in Mullin, Texas to Fred Oliver Pafford and Lillie Ilene Anderson... View Obituary & Service Information

The family of Annie Marie Shirley created this Life Tributes page to make it easy to share your memories.

Send flowers to the Shirley family.