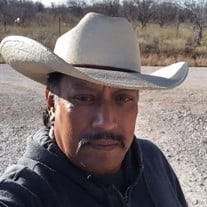 Asuncion Quiroz Avila, 57, of Brownwood passed away, Sunday, January 2, 2022. A visitation will be held at Heartland Funeral Home from 6:00 - 8:00 PM, Friday, January 7, 2022. Funeral service will be held in the Heartland Funeral Home Chapel at 10:00 AM, Saturday, January 8, 2022 with interment to follow at Rocky Creek Cemetery. Asuncion or "Chon or Primo" as he was called, was born in San Cristóbal, in the municipality of Catorce in the Mexican state of San Luis Potosí, Mexico to Eulogio Escaname Avila and Maria Elena Quiroz Avila. He attended school in San Luis Potosi, Mexico where h studied Agricultural Technology. After moving to the states with his wife and family, he worked for John Deer in Brownfield, Texas. He moved to Brownwood where he worked for David's Tire Shop for several years. Asuncion suffered a major accidental injury to his left hand and thanks to his reconstructive surgery by Dr. Roberts, he was able to continue working small jobs here and there in construction and masonry. He was a hardworking man who loved music, horses, and cooking barbecue for his family. There was nothing that Asuncion loved more than his grandchildren. A man's man, who would give the shirt off of his back for anyone, but his grandkids held a special place in his heart. He played a pivotal role in all of their lives from the time they were young, until his last days. Always supportive of them in all of their goals, and always ready to help in any way he could. He never wanted to miss a moment. Whether it was ball games, a graduation, good times, or hard times, he was always there for them. He is so proud of all of you. Asuncion was born and raised Catholic, but attended Milton Avenue Baptist Church with his family and enjoyed the friendship of his church family and pastor. Asuncion is survived by his beloved wife, Lupe Avila of Brownwood; mother, Maria Elena Quiroz Avila; sons, Michael Gongora and wife Janie of San Angelo, Joel Gongora and wife Joni of Brownwood; daughter Michelle Adams and husband Bryan of Early; siblings, Eleazar, Arturo, Rebeca, Ismael, Gaddiel, Abner, Daniel, and Sara Avila, Ruben Castro & Roseanna Castro; grandchildren, Amanda Moscorro, Jordan, Raeann, Danyelle, Jada, Madison, Morgan Gongora, Tatum, Kinley and Brycen Adams; and many nieces, nephews, church family and friends. Asuncion was preceded in death by his father, Eulogio Escaname Avila, his grandfather, grandmother, an uncle and a sister-in-law. Online condolences, tributes and memorials can be given to the family at www.heartlandfunealhome.net

The family of Asuncion Quiroz Avila created this Life Tributes page to make it easy to share your memories.

Send flowers to the Avila family.