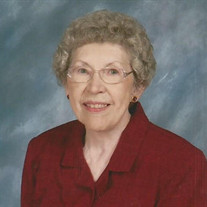 Bernice Kobel of Brownwood, formerly of San Angelo, passed away December 15, 2020 in Brownwood, Texas. She was born to Edward and Adela (Niehues) Hoelscher on September 18, 1929 in Barclay, Texas, Falls County. She attended school at Barclay until the family moved to West Texas in the 1940s. She graduated from St. Joseph's High School in Rowena, Texas in 1946. After graduation she worked at Nelson's Dress Shop and San Angelo National Bank. She married Paul L. Kobel, Jr. February 7, 1953 at St. Boniface Catholic Church in Olfen, Texas and was a dedicated Air Force wife. She moved with her husband and family to Mississippi, Libya, Virginia, Hawaii and Texas. They had 6 children. Bernice was a member of the Catholic Daughters of America in Olfen and Our Lady of the Airways at Hickam AFB in Hawaii. She was also a member of the Catholic Women's Organization at St. Margaret's Catholic Church in San Angelo for over 30 years. After Paul's retirement from the Air Force, the family settled in San Angelo in 1971. Bernice worked at St. John's Hospital business office for 23 years. As a homemaker, Bernice enjoyed cooking and baking pies for her children and grandchildren. She liked being Catholic and enjoyed being with her church family where she helped with many potluck dinners and bazaars. Bernice also really enjoyed playing Bunco with 7 of her friends and meeting a group of her St. John's co-workers for dinner each month. In 2014 she moved to Care Independent Retirement Apartments in Brownwood, Texas and more recently into Care Nursing and Rehabilitation, where she lived until her passing. She is preceded in death by her husband, Paul, granddaughter Macy Lynn Ruiz, parents Edward and Adela Hoelscher, parents-in-law Paul and Rena Kobel, sisters Gladys and Dolores Hoelscher and nephew Douglas Frerich. She is survived by her six children and their spouses, Beverly and Larry Broome, John and Sheryl Kobel, Paul and Penny Kobel, Mary and Larry Boone, James and Stephanie Kobel, and Susan and Sam Ruiz, 18 grandchildren and 17 great-grandchildren, 1 sister, Mildred Frerich, 1 sister-in-law, Florence Mullaney and husband Harold and 2 brothers-in-law, Bernard Kobel and Edward Kobel and wife Sue. She had numerous nieces, nephews and cousins. Services are being handled by Heartland Funeral Home in Brownwood, Texas. A family graveside service will be held on Friday, December 18 at 2 p.m. at St. Boniface Catholic Cemetery in Olfen, Texas. In lieu of flowers, please make donations to Mount Carmel Hermitage in Christoval, Texas, St. Margaret's Catholic Church in San Angelo, Texas, St. Boniface Cemetery Association in Olfen, Texas or a charity of your choice.

Bernice Kobel of Brownwood, formerly of San Angelo, passed away December 15, 2020 in Brownwood, Texas. She was born to Edward and Adela (Niehues) Hoelscher on September 18, 1929 in Barclay, Texas, Falls County. She attended school at Barclay... View Obituary & Service Information

The family of Bernice Lavelle Kobel created this Life Tributes page to make it easy to share your memories.

Bernice Kobel of Brownwood, formerly of San Angelo, passed away...

Send flowers to the Kobel family.