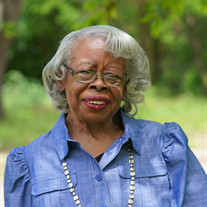 Betty Jean Moore age 81 of Brownwood, went to be with her Lord on Friday, December 31st peacefully at her home. A visitation will be held from 6 pm to 8pm Friday, January 14th at Heartland Funeral Home in Early. Funeral Services will be 11 am Saturday, January 15th at Little Zion Baptist Church in Brownwood, interment to follow at Greenleaf Cemetery. Officiated by Rev. Jessie Turner. Family asks that masks be worn during the services. Betty Jean Harrison Moore was born Tuesday, December 31, 1940 in Caldwell, Texas to Edward Harrison, Sr. and Airdean Vivian (Smothers) Harrison. She confessed her love for Christ at an early age and began her Christian education at Providence Missionary Baptist Church in Belltown, Texas. She attended and graduated from Freeman High School, in Caldwell, Texas in 1957. On August 23,1957, she was united in Holy Matrimony to her high school sweetheart Richard Nathaniel Moore, and to this union three children were born. Upon moving to Brownwood, Texas she united with Little Zion Baptist Church where she served faithfully until her death. Betty served as a Sunday School/Baptist Training Union teacher. She sang in the Senior Choir, was a member of the Usher Board as well as a sponsor for the Junior Usher Board. She was a member of the Missionary Society and many other positions until she was called home. Betty became a TG&Y employee in March 30th of 1971. She began in the Garden Center but quickly moved to Electronics department. In 1975 she was asked to become a part of the Shrinkage Committee. Subsequently, she was chosen to represent the area in Oklahoma City in the Shrinkage Committee Training Program. In 1978, she was promoted to Area Supervisor. In 1980 she became Personnel Manager for TG&Y and served in this position until her retirement. After retiring from TG&Y she became a full-time independent Avon representative for the 46 years at which time she was affectionately known as "The Avon Lady." In her tenure with Avon she was at one time one of the top three sales representatives in the U.S. Her husband Richard Nathaniel Moore preceded her in death. She leaves to cherish her memories; one loving son David Wayne (Cheryl) Moore of Brownwood, Texas and two loving daughters Carolyn Ann (Windell) Green of Bastrop, Texas and Vivian Denise (Robert) Washington of Cedar Creek, Texas. She leaves to cherish her memories grandchildren, LaTasha Moore (Freddy) of Ballinger, Texas; Patrick (Jamie) Williams of Arlington, Texas; Precious (Keland) Majors of Plano, Texas; Kheyera Taeon Washington of Austin, Texas and NaKiva Aston (Vincent)Washington-Fitzpatrick of DelValle, Texas; Zachary O'Neil (Cyerra) Green of San Antonio, Texas. Melanie Majors of Arlington, Texas; Micah (Elizabeth) Ripley and Candice Bowles of Brownwood, Texas and Jeremy (Danyelle) Ellett of Austin, Texas. In addition, she leaves seven great-grandchildren Devin and Amara Harris of Ballinger, Texas, Kyra Martinez of Ballinger, Texas; Mackenzie Majors of Plano, Texas; Isaiah Guillotte and Rico Bowles of Brownwood, Texas; and Anfernee Williams of Arlington, Texas. She also leaves three siblings to cherish her memories: Dorothy Donovan of Lubbock, Texas; Anderson George Harrison of Rielto, California and Jimmy Roy Harrison of Grand Prairie, Texas as well as a host of nieces and nephews, relatives and friends.

Betty Jean Moore age 81 of Brownwood, went to be with her Lord on Friday, December 31st peacefully at her home. A visitation will be held from 6 pm to 8pm Friday, January 14th at Heartland Funeral Home in Early. Funeral Services will be 11 am... View Obituary & Service Information

The family of Betty Jean Moore created this Life Tributes page to make it easy to share your memories.

Betty Jean Moore age 81 of Brownwood, went to be with her Lord...

Send flowers to the Moore family.