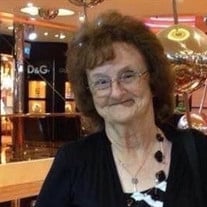 Betty Louise Netherton was born on May 7, 1940 in Brownwood to Della Alberta (Norwood) and Fred Roy Netherton, Sr. She married James Allen Walters on November 16, 1984 in Brownwood. Betty was a member of Harvest Time Tabernacle. She enjoyed... View Obituary & Service Information

The family of Betty Louise Walters created this Life Tributes page to make it easy to share your memories.

Send flowers to the Walters family.