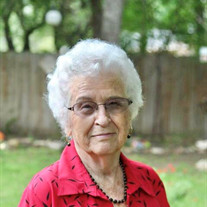 Willie Florence Shiflet Milburn, 97, of Brownwood, formerly of Nocona, passed from this life Monday, November 16, 2020, in Granbury, due to complications from COVID-19. Willie was born to Emmit and Cliffie Ann (Sloan) Shiflet in Quanah December 21, 1922. She and her siblings were raised on a farm in the North Texas community of Marysville. At some point in her youth, Willie became known as “Billie.” Her family never knew the why or how of that, but some have suggested it was because she had a sister named Jimmie, while others think it was due to her being able to out hit and out throw every boy on the baseball field. However it was, she grew up and became a young adult through two of the most impactful events of the 20th Century – The Great Depression and WWII. No doubt these events helped shape her into the woman she became, a woman of tremendous fortitude and determination, full of compassion and love, especially for her family, and a member of the Greatest Generation. Pearl Harbor was bombed on December 7, 1941. On her 19th birthday, December 21, 1941, she married her handsome fiancé from a neighboring community, Charles F. Milburn. He had received his draft notice and left for basic training February 4, 1942. After completing basic training, she followed him to California as he trained and waited to ship out to the South Pacific. While in California, she trained and earned her certificate as a “Rosie the Riveter.” Once he shipped out, she returned to Texas to work and help her family and his with their farms. That generation’s spirit was already at work in her. After three years of jungle warfare, Charles returned home to his bride – a different man than the one she married – his body racked with bouts of malaria and his mind racked with debilitating PTSD. That is when Billie went to war, fighting for that man she married. As they started their family, she truly was the glue God used to put him back together and hold him together so that he lived a great life as a bi-vocational minister and businessman. That generation’s spirit working again. The grit and determination of that generation was called upon again in 1958. Billie and Charles and their three children were living the typical post-war middle-class life when the polio epidemic came knocking on their door. Within days their youngest child went from a busy toddler to one who could not stand or breath on her own. While Charles worked, it fell to Billie to travel back and forth from Nocona to the hospital in Houston for almost a year, all the while trying to be all she needed to be for everyone in the family – wife and business partner to Charles, Mom to Jeanette and Mike, and comforter and encourager to Debbie. That spirit! It was her generation’s “We can do it!” spirit that enabled her family to thrive. Each one faced their own difficulties with Billie by their side and became all that God purposed them to be. Billie would never say this and certainly would not boast about it, but she knew by experience that the Greatest Generation consists of more than those who wore the uniform. It consists of wives, mothers, sisters, and men who never served but kept the factories running and the farms and ranches working so the Homefront and the theaters of war were supplied with what each needed in order that the Great Evils of that time could be defeated. Billie was part of that heroic generation and was and will always be a hero to her family.

Willie Florence Shiflet Milburn, 97, of Brownwood, formerly of Nocona, passed from this life Monday, November 16, 2020, in Granbury, due to complications from COVID-19. Willie was born to Emmit and Cliffie Ann (Sloan) Shiflet in Quanah December... View Obituary & Service Information

The family of Billie Milburn created this Life Tributes page to make it easy to share your memories.

Send flowers to the Milburn family.