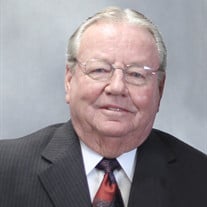 Billy Ned Gribble passed away on Saturday, January 15, 2022. Visitation will be held at Heartland Funeral Home from 5:00 to 7:00 PM, Thursday, January 20, 2022. Funeral Service will be held at Austin Avenue Church of Christ at 11:00 AM, Friday, January 21, 2022 with interment to follow at Eastlawn Memorial Park Cemetery. Billy Ned Gribble was born on May 30, 1935, in Temple to Ernest and Mirtle Gribble. He was a graduate of Temple High School. On June 11, 1955, Billy married LaVerne in Temple. Together they enjoyed 59 years of marriage until LaVerne's passing in 2015. Billy was working for A.E. Collier Electric, and moved to Brownwood to do the electrical on the construction of the Brownwood Coliseum in 1963. He later became a partner in Pecan Valley Electric Company Inc and in 1967, he purchased the remaining interest in the company. Pecan Valley became known as the electrical contractor for many of the industrial projects in Brownwood including Kohler, Performance Pipe, and Superior Cable. They also completed many airport lighting, commercial and residential projects. Billy loved to play golf and played in many tournaments for years. He raised Maine Anjou and registered Charolais cattle and watching and riding cutting horses with Julie. Billy also enjoyed deer hunting at the G-Bar Ranch. He was a member of the Brown County Sheriff's Posse, Brownwood Jaycees, Brown County Youth Fair Association. Billy and LaVerne were longtime members of the Austin Avenue Church of Christ. Billy is survived by a daughter, Julie K. Gribble of Brownwood, a brother, Gary Fred Gribble and wife Diane, and a sister, Sandra Sheffield and husband Wade; and numerous nieces and nephews. He was preceded in death by his parents and his wife LaVerne T. Gribble. The family would like to extend a special heartfelt thank you to Cheyenne Musick, Margie McMillan and the whole crew at Kinder Hearts Home Health & Hospice (formerly CMS Healthcare) for their attention, care and friendship in their time of need, Thank you very much! In lieu of flowers, the family requests memorials be made to Cherokee Home for Children, P.O. Box 295, Cherokee, TX 76832.

Billy Ned Gribble passed away on Saturday, January 15, 2022. Visitation will be held at Heartland Funeral Home from 5:00 to 7:00 PM, Thursday, January 20, 2022. Funeral Service will be held at Austin Avenue Church of Christ at 11:00 AM, Friday,... View Obituary & Service Information

The family of Billy Gribble created this Life Tributes page to make it easy to share your memories.

Send flowers to the Gribble family.