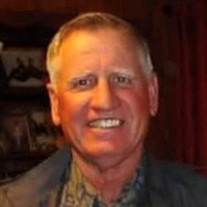 Steve McGinnis peacefully passed from this life on Friday, July 10th, 2020, with his brother and two daughters by his side. He was 77 years old. Steve was a life long DeLeon resident. He was born on March 18, 1943, in Gorman, Texas to Rex and Lily Belle McGinnis. He was raised in Downing as a young child then moved to DeLeon where he attended DeLeon schools and graduated from DeLeon High School. In school, Steve played football, basketball and track. He was also a champion competitive boxer. During high school, he competed in the State boxing championship. He won the Golden Gloves title boxing championship numerous times and boxed competitively during his time in the Army. Steve was an Army tank commander in the Vietnam War from April 1967 to January 1969. He received numerous Bronze medals for heroism in connection with military operations against a hostile force while serving with C Troop, 3rdSquadron, 4thCavalry in the Republic of Vietnam. According to the men he served with in C Troop, Steve’s bravery instilled calm in the men in his unit. He grew up working on the Downing family farm. After receiving his Masters in Agricultural Science, Steve partnered with his bother Jerry to run the family farm. Steve farmed from the time he was a young child until he retired in 2015. Together, the brothers raised peanuts, watermelons, cantaloupes, pecans and various grains. They won numerous awards for soil conservation and peanut quality. Texas A&M contracted with the McGinnis brothers to test new peanut varieties on their farm. Steve was the proud father of two daughters, Judy and Jerri Linn. He was a dedicated father that loved his girls unconditionally. When he wasn’t farming, he enjoyed spending time with his daughters and grandchildren. He regularly drove all over Texas, to Chicago and to Phoenix to visit them. They all loved, adored and cherished him. Steve also enjoyed country and western dancing. He was a man of integrity. His work ethic was unparalleled. He was a loyal friend and family member and took great care of his mother. He was known for giving away fruits and vegetables from his farm. When a friend or family member was in need, Steve was the first to show up to help and the last to leave. Steve was well respected and loved by family and friends. God broke the mold when He made Steve…he was a good as they come. Steve is survived by his brother Jerry McGinnis, sister-in-law, Janet; Daughters Judy Hunt, Jerri Linn Belkin and her husband Benjamin; Grandchildren: Taylor German and her husband Garrett; Chandler Hunt and his wife Marissa, Alexis Belkin and Rex Belkin; Great-grandchildren; Weslyn German; Niece: Cathy Gray, Nephews: Jeff Gray and Brad Gray and his wife Milly; Great Niece: Linzi McElfresh and her husband Brent; Great Nephew: Brady Gray; Great-great Nephew: Kase McElfresh. He was preceded in death by his parents Rex and Lily Belle McGinnis and sister Juanita Gray. Arrangements were entrusted to Heartland Funeral Home of Comanche and the family held a small private viewing. No services are planned at this time. The family will host a future public memorial in 2021. If desired, memorial donations may be made to the Wounded Warrior Project: P.O. Box 758516, Topeka, Kansas 66675, in honor of Steve. www.WoundedProject.org

Steve McGinnis peacefully passed from this life on Friday, July 10th, 2020, with his brother and two daughters by his side. He was 77 years old. Steve was a life long DeLeon resident. He was born on March 18, 1943, in Gorman, Texas to Rex and... View Obituary & Service Information

The family of Billy Steve McGinnis created this Life Tributes page to make it easy to share your memories.

Steve McGinnis peacefully passed from this life on Friday, July...

Send flowers to the McGinnis family.