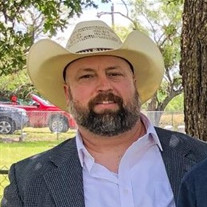 On Friday, November 28, 2020 Brandon Minica, a loving father, son, brother, nephew, cousin, uncle, and grandson, passed away at the age of 41. Funeral service will be held at 10:00 AM, Friday, December 4, 2020, in the Heartland Funeral Home Chapel with interment to follow at Salt Creek Cemetery officiated by Heath Henry. Brandon was born September 21, 1979 in Goldthwaite Texas. He lived in Early Texas and attended Early school K-12th. He was active in football, Theater Arts, track, and FFA. Brandon worked for the City of Early the summers of his Junior and Senior year. He graduated Early High School in 1998. Brandon attended Cisco Junior College and joined the US Air Force in 2001. He served his country from 2001 through 2006. He was stationed in South Dakota, and Diego Garcia, in the British Indian Ocean Territory. After his time in the military he moved back to his hometown, Early Texas. Brandon then moved to Amory. Mississippi to be near the love of his life, his daughter, Madalynn Minica, where he worked for the United States Postal Service from 2013 until the time of his death. He was a member of Salt Creek Baptist Church. Brandon is survived by his Parents, Tommy and Patricia Storey; his daughter, who was his world, Madalynn Minica, her Mother, Ashley Foster; four brothers and their spouses, Bryan and Jennifer Storey, Derek Storey, Clay and Magen Storey, and Dylan Storey; four sisters and their spouses, Kristin Minica, Kim and Jon Permenter, Hayley and Nathan Oaksford and Briana Storey. Nephews and Nieces, Jaxen, Aidyn, Aleck, Emma, Lincoln, Lillie, Kyle, Chance, Taylor, and Andrew. His Grandmothers, Bonnie Covey, and Patsy Storey. Numerous Aunts, uncles, cousins, and friends. Brandon was preceded in death by Ricky Minica and his grandfathers, Edward Covey and Henry Storey. In Lieu of flowers, Madalynn has asked that donations be made to the Huntington’s Disease Society of America https://hdsa.org/get-involved/donation-opportunities/ , where she is the teen spokesperson. Her stepfather, Timothy Foster is battling Huntington’s.

On Friday, November 28, 2020 Brandon Minica, a loving father, son, brother, nephew, cousin, uncle, and grandson, passed away at the age of 41. Funeral service will be held at 10:00 AM, Friday, December 4, 2020, in the Heartland Funeral Home... View Obituary & Service Information

The family of Brandon Lee Minica created this Life Tributes page to make it easy to share your memories.

Send flowers to the Minica family.