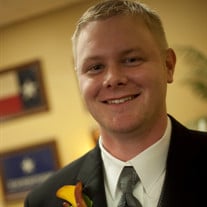 Cade Thomas Goodwin, 34, of Brownwood, passed away Friday February 19, 2021. A Celebration of Cade's life service will be held at 10 AM, March 6, 2021 in the Heartland Funeral Home Chapel, 303 Early Blvd., Early, Texas. Cade was born May 5, 1986 at Brownwood Regional Hospital in Brownwood, Texas to Jesse and Nina Goodwin. He graduated from Blanco High School in 2004 and attended Tarleton State University where he graduated in 2009 with a Bachelor's degree in Agriculture Services and Development. Cade Goodwin married Samantha Skibicki October 14, 2011 at Briscoe Manor in Richmond, Texas and began a life together. They were later blessed with one daughter, Sarah Beth in April of 2020. Cade enjoyed spending time outdoors whether it was hunting, fishing, or sitting on the patio talking with friends and family. He also enjoyed immersing himself in military history and current events. Cade adored his daughter Sarah and loved spending most of his time with his family and amongst friends. Cade is survived by his wife of almost 10 years, Samantha Goodwin and daughter Sarah Beth of Brownwood Texas; Parents, Jesse and Nina Goodwin of Blanco Texas; Brother, Jason Goodwin and his wife Olivia of Sheridan, Wyoming; Father-in-law, Michael Skibicki of Katy, Texas; Brother-in-law, Ryan Skibicki of Katy, Texas; along with numerous uncles, aunts, cousins, nieces, and nephews. In lieu of flowers the family request that donations be made to a fund for Sarah Beth Goodwin, Cade's daughter, at Texas Regional Bank c/o Tabitha at 206 E Main St, Johnson City, TX 78636. Cade was preceded in death by his grandparents, Aubrey and Carolyn Goodwin, Walter and Jo Ann Hamilton; and his mother- in-law, Jodie Skibicki. Online condolences, tributes and memorials can be shared with family at www.heartlandfuneralhome.net

The family of Cade Thomas Goodwin created this Life Tributes page to make it easy to share your memories.

Send flowers to the Goodwin family.