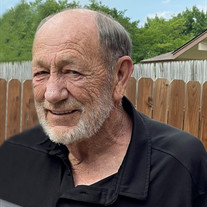 Carl Wayne Mittelstet, age 71 passed away on Wednesday, September 1, 2021 at home surrounded by his family. Carl was born on Thursday, November 3, 1949 in Aline, Oklahoma to Ed and Rachel Mittelstet. Carl graduated from Aline High School, where he enjoyed playing basketball, baseball and tennis. He married Judy Lamb on June 22, 1984 in Lubbock, TX and began a life together that blessed them with 4 children. Carl worked for Santa Fe Railroad for many years. He took early retirement and worked at Commercial Lawnmower Service and eventually RV Service Manager in Seguin, TX. Carl enjoyed the lake life where he retired at Lake Brownwood, Texas in 2015. He enjoyed taking Judy to nascar races, drag races and tractor pulls. He and Judy also enjoyed fishing together for many years on the lake and surf fishing at various beaches between Texas and Florida. Carl loved buying new vehicles, he and Judy had many of them. He was a negotiator when it came to vehicle purchases and helped many people with their purchases, whether it was the wisest choice at the time, but the end result was always good. Carl had been a member of the National Guard, "weekend warrior" as he described himself. Carl is survived by his wife Judy Lamb Mittelstet of May, TX; 3 daughters, Danette Speck Roper of Bedford, TX, Angie Gerlock of Las Vegas, NV and Shelly Duecker of Oregon; son Brent Speck and wife Jackie of Eagleville, TN; 2 brothers, Micky Mittelstet and wife Dee of Oklahoma and Ed Mittelstet and wife Fran of Hermitage, TN; sister Vicky Ebersole of Enid, OK.; 2 grandchildren, Richard Gerlock of Las Vegas, NV and Falyn Duecker of Oregon. He is preceded in death by his parents, Ed & Rachel Mittelstet, and sister Donna Drake. In Lieu of flowers the family requested that donations be made to the Walker Cancer Center Patient Fund, P O Box 1861, Brownwood, Texas 76801. Online condolences can be made to the family at www.heartlandfuneralhome.net

Carl Wayne Mittelstet, age 71 passed away on Wednesday, September 1, 2021 at home surrounded by his family. Carl was born on Thursday, November 3, 1949 in Aline, Oklahoma to Ed and Rachel Mittelstet. Carl graduated from Aline High School, where... View Obituary & Service Information

The family of Carl Mittelstet created this Life Tributes page to make it easy to share your memories.

Send flowers to the Mittelstet family.