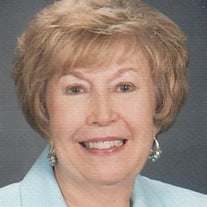 Carol Conway Jordan of Brownwood, Texas, passed away Sunday, October 17, surrounded by family. She was born on September 27, 1936, in Austin, Texas. She is the daughter of Joseph Hendrix Conway, III and Oquilla Smith Conway Foster. Carol grew up in Bryan, Texas, and graduated from Texas Christian University. She met Donald Frye Jordan Jr. on a blind date in Brownwood, and they married shortly after. They shared 63 happy years. She is survived by her loving husband, Don Jordan, Jr., and her three children, Conway Jordan of Brownwood, Julie Flaa and husband Will of Dallas, and Kelly Southard and husband Cliff of Dallas. Carol was very proud of her grandchildren, Jaxon Jordan and wife Hayden of Abilene, Maggye Sitzes and husband Tyler of Abilene, Madeline Jordan of Abilene, Jordan Flaa Williams and husband Alex of Dallas, Wesley Flaa of Dallas, Sydney Southard of Dallas, and Emily Southard of Austin. In the last year, she became a great-Mimi to Shepherd Stizes and Sutton Jordan. Carol was very involved in many community and social organizations. She loved playing bridge, entertaining, reading, musical theater, and shopping for the perfect gifts and birthday cards for her friends and family. Music was her passion, career, and second love. Carol began playing the organ for the military base in Bryan at the young age of twelve. After moving to Brownwood, she began playing the organ for The First Presbyterian church. After 40 years of service as an organist, she retired to travel and spend more time with family. That didn't last long. Carol substituted for other organists in various churches in town, which led to her next 15-year musical adventure as organist for First United Methodist Church in Brownwood. She passionately played every Sunday up until her passing. Playing for hundreds of weddings and funerals always made her happy. She felt she was using her gift to bring beauty to the occasion. Some of her favorite memories were annual family trips to Camp Warnecke in New Braunfels. She and the other ladies planned all year to make each trip better than the last. She is most proud of her award for "Most Campers In a Room" in 1983. Carol continued to keep a very close connection with a small group of her childhood friends, and she always said they were more like sisters. From her first visit to Brownwood to attend a dance that would change her life forever, she began building lifelong friendships that continued to multiply over the next 64 years. She treasured her friends! A Celebration of Life will be held on Saturday, October 23 at 11:00 at First United Methodist Church in Brownwood. In lieu of flowers, memorials can be made to the Sanctuary Choir Fund of First United Methodist Church, 2500 11th St, Brownwood, 76801 or the Brownwood Lyric Theater, PO Box 1886, Brownwood, 76804. Condolences, memories, and tributes can be shared with Carol's family online at heartlandfuneralhome.net

The family of Carol Jordan created this Life Tributes page to make it easy to share your memories.

Send flowers to the Jordan family.