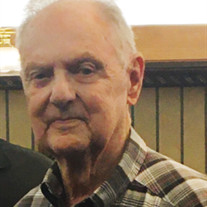 Charles Raymond Lindsey went to be with our Lord on May 13, 2021 at age 90. A Funeral Mass will be at Saint Mary Queen of Peace Church in Brownwood at 2pm on Tuesday, May 18th. A visitation will be at Heartland Funeral Home in Early at 6-7pm and Rosary to follow from 7-8pm on Monday, May 17th. Charles was born to Loraine and C.B. Lindsey on January 9, 1931 at Medical Arts in Brownwood, Texas. He graduated from Brownwood High School in 1948. He attended Daniel Baker College. He then attended University of North Texas where he met the love of his life, Marcy Jo Swindle. Charles and Marcy were married November 3, 1951. They lived in Corpus Christi, Tx and were blessed with 5 daughters. Charles was employed with Hunt Tool Company for 10 years. He then moved his family to Brownwood to work with his mother at the popular landmark, Lindsey's Drive-In. Charles and his wife Marcy owned and operated Lindsey's Drive-In side-by-side for 30 years. Marcy, credited Charles's great sense of humor with their knack of getting along with one another both on the job and at home. He was an active member at Saint Mary's Queen of Peace church for 56 years as a life-time member of the Knights of Columbus, a member of the St. Mary's Men's club and the Saturday morning men's bible study. Not only was he an avid hunter, fisherman, boater, and camper, but he also enjoyed these pastimes with his wife, daughters, grandchildren, and numerous relatives. Charles developed an interest and love of cars from an early age and could identify every make of car since the Model-T! He is preceded in death by his mother, Loraine Rebecca Lindsey, his father, C.B. Lindsey, and his wife, Marcy Jo (Swindle) Lindsey. He is survived by his daughter, Marcella Ann Trapp and husband, Joe; daughter, Sheree Kay Moore and husband, Chester; daughter, Gail Marie Thomas and husband, Curtis; daughter, Mary Julianne Davis and husband, Kim; daughter, Melissa Suzanne Wynn and husband, Doug. He has 15 precious grandchildren and 18 lovely great grandchildren. In Lieu of flowers donations can be made to the Carmelite Community, in Christoval, Texas @ http://www.carmelitehermits.org/index.htm

Charles Raymond Lindsey went to be with our Lord on May 13, 2021 at age 90. A Funeral Mass will be at Saint Mary Queen of Peace Church in Brownwood at 2pm on Tuesday, May 18th. A visitation will be at Heartland Funeral Home in Early at 6-7pm... View Obituary & Service Information

The family of Charles R. Lindsey created this Life Tributes page to make it easy to share your memories.

Send flowers to the Lindsey family.