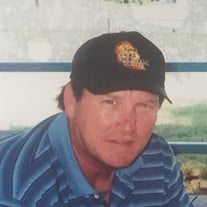 Don Paul, 66, of Brownwood, Texas passed away Sunday, March 27, 2022. A Celebration of Life ceremony will be held at 10:00 AM, April 2, 2022 in the St. Joe Baptist Church, 621 Hwy 2921, DeLeon, Texas 76444 Officiated by Pastor Heath Sylva. Don Paul was born March 5, 1956 in Bay City, Texas to Charles Edgar and Donna Mae (McClellan) Paul, one of eight children. He graduated from De Leon High School where he enjoyed playing football and winning titles. Don went to school and became a mud engineer in the oilfield. He later started a trucking company and hauled mud to drilling rigs for many years. On January 29, 1995, Don married Lesa Hamrick and the two merged their children into one family that Don called his own. When Don started his trucking company, he named it CDL Enterprises where his wife and children, Courtney, Jeremie & Kathie all worked doing various parts of the business. Don's friend, Lynn Chupp was involved in the Tractor Pulls and he always enjoyed taking the family to the events. He loved watching his girls and son play softball, western tv shows and movies, although he could be caught watching shows like Shrek and Cars too. He was often tinkering on motors and doing guy things in the shop but he was passionate about driving trucks and his family. Lesa and him would spend days off going antiquing and Don was always on the look out for old telephones or anything electronic that could shock you. His office was decorated in John Deere stuff, he was a collector. He bought his grandson, Case Roberts, small die cast John Deere tractors that he kept and added to his collection. Don loved his family and loved family time together, his passing has left a void that can not be filled. Don is survived by his wife, Lesa Hamrick Paul of Brownwood; children, Valerie Paul & Cindy Carr of Conroe, Jeremie & Kathie Matlock of Brownwood, Staci & Danielle Paul of Richmond, Courtney & Nicco Martinez of Spring, Traci & Clint Lacaze of Wharton; grandchildren, Skyler Matlock, Katelin Yates, Case Roberts, Kennedee Paul, Bella Matlock, Kadence Paul & Hudson Martinez; siblings, Sharon Richey, Margaret & Gene Dukes, Lou Ellen Snell, Roy & Sandra Paul, Roxanna & Monte Thiebaud, Janet & Andre' DeJean; brother-in-law, Wallace Kelly; his fur baby best friend, Missy; and many nieces, nephews and friends. Don was preceded in death by his parents; 2 sisters, Dianna Kelly & Vanessa Paul. Online condolences, tributes and memorials can be shared with the family at www.heartlandfuneralhome.net

The family of Don Paul created this Life Tributes page to make it easy to share your memories.

Send flowers to the Paul family.