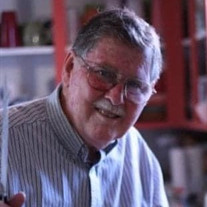 Charles Adolph Polaski was welcomed home by his Savior on November 28, 2020, having been visited and surrounded by family and friends for the previous several weeks. He was born in San Antonio on July 26th, 1932 to Elton A. and Zita Ryan Polaski. His mom contracted tuberculosis shortly after he was born, and he was raised by the Derrick family until age 6. After graduation from Hot Wells High School in San Antonio he followed his brother in the U.S. Navy where he studied electronics and was a radar tech in Newfoundland during the Korean War. After his service he went to Texas A & M University where he received his bachelor’s degree in Electronics Engineering. He married the one true love of his life Maxine Matlock August 4, 1956 in San Antonio, TX. He returned to A & M to get his master’s degree in Nuclear Engineering and worked at the Nuclear Science Center in College Station. He had several opportunities in research on laser and other technologies that are used in medicine today. He was senior research operator at the nuclear reactor facilities at General Dynamics in Ft, Worth in the late sixties. They raised their family in College Station, San Antonio, and Fort Worth. He took a hard left turn and became a High School teacher of advanced math and Physics in San Saba, TX for several years when he and Maxine moved to Richland Springs to care for her aging parents. He returned to engineering in 1979 when he started Polaski Engineering and Surveying in Brownwood, Texas, and worked until 2016, his 84th year when he and Maxine moved to Ft. Worth. Both of his children were privileged to work for him in that business as well as two of his nephews, all at various times. He was a member of Victory Life Church in Brownwood, but everywhere he lived, he served in a local church body as a leader and a great encourager, whether it was hosting a life group in their home, or being a great example of a godly man, husband, and father.He is survived by his beloved wife Maxine of Ft. Worth; a son, Steve Polaski and his wife Pam of Chandler, Oklahoma; and by his daughter, Melissa Davis, and her husband Mark of Ft. Worth. He is also survived by 8 grandchildren: Landry Polaski, Jay Polaski & Dani, all of Ft Worth, TX, Michael Davis & Christie of Elba, New York, Cameron Polaski of Dongtan, South Korea, Michele Davis Yates & Tyler of Pepperell, Massachusetts, Logan Polaski & Haley of Chandler, Oklahoma, Aaron Davis and Evan Davis both of Fort Worth, TX; His brother, Richard Pulaski of Lufkin, TX and sister, Molly Polaski Nay of Waco, TX; Brother-in-law Warren Matlock & Sherry, of Plano, TX; double nephews, Kevin Pulaski & Amy of Abilene,TX and Keith Pulaski & Felicia of Moody, TX, Elizabeth Matlock Murray & Tom of San Saba, TX, and many more much loved nieces and nephews. Kevin, Keith, and Elizabeth were much more than nephews and niece to him. They were very dear to his heart as they spent many a day in their formative years under his watchful eye and guidance, and in his last few weeks, were just as important to his care as his own two children. He is also survived by 12 great-grandchildren, Aunika, Aliyah, Rylee, Landon, Carly, Alannah, Nolon, Hannah, Judah, twins Nix & Whit (due in March) and one great-great grandson, Hayden. He loved and was loved by so many that there is not enough room to list them all but there are many more, take my word for it.He was preceded in death by his parents and the Derrick family who fostered him during his mother’s illness, and by Courtney Polaski Elmore, his granddaughter and oldest grandchild, all of whom welcomed him to his heavenly home, along with various other family and friends who have gone before and make Heaven a little sweeter for all of us.Online condolences can be made to the family at www.heartlandfuneralhome.net

Charles Adolph Polaski was welcomed home by his Savior on November 28, 2020, having been visited and surrounded by family and friends for the previous several weeks. He was born in San Antonio on July 26th, 1932 to Elton A. and Zita Ryan Polaski.... View Obituary & Service Information

The family of Charles Polaski created this Life Tributes page to make it easy to share your memories.

Charles Adolph Polaski was welcomed home by his Savior on November...

Send flowers to the Polaski family.