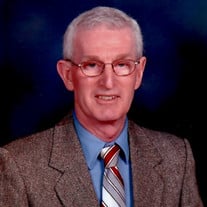 Christopher Carl Hazelwood was born on January 12, 1947 in Sherman, Texas to William Carl Hazelwood and Mildred Louise Jones Hazelwood. He passed from his earthly 73 years and 10 months journey on December 08, 2020 while residing at the CARE, Inc. Nursing Facility in Early, Texas. Chris had no siblings and never married leaving no children behind. His extended family have mostly passed and are not nearby. Chris’ family were primarily those brothers and sisters in his church family, the Austin Avenue Church of Christ in Brownwood, Texas. These are too numerous to list. Chris will be interred alongside his parents in their family plot at the Christian Chapel Cemetery, Sadler, Texas. Plans for a memorial service have not been finalized at this time. Cards and letters may be addressed to the Austin Avenue Church of Christ, 1020 Austin Ave., Brownwood, Texas 76801. Chris was most proud of the mission work conducted by this church and anyone wishing to contribute to this effort in his name would please him very much. Chris grew up in Texas and New Mexico graduating from Tatum, NM High School. He was a good student and participated in organized sports, especially track and field. After graduation he enrolled in Abilene Christian College and completed a Bachelor’s Degree in Education. He taught high school in Abilene for a year and then entered the business world. He worked in the grocery business for several years alongside his father. His family would move to Mineral Wells, Texas in the grocery business and then come to Brownwood where his father would work in the J.R. Beadel store and Chris would work for Montgomery Ward until the closing of that business. He would work for TWT Molding and then in 1992 began an employment at the Austin Avenue Church of Christ as Custodian. He would maintain this position for 23 years before retiring. Chris excelled in his love for his family network, his church and his accomplishments both singing and as a world-class guitar player. His parents were musicians and inspired Chris to enter with enthusiasm the fiddle playing arena. He mastered the rhythm guitar and played at numerous fiddle contests as part of a group, sometimes with his father, that almost always won the competitions. He travelled in his off-work time with these country-western, fiddle ensembles, one being a professional group that won national competitions, producing several professionally recorded albums. He would also produce and sing two acapella gospel quartet music albums. He sang for numerous funerals and weddings throughout his life. His church family was very dear to him. He had several fishing and hunting buddies. He thoroughly enjoyed the out-of-doors and God’s handiwork in fauna and flora and enjoyed taking pictures of bluebonnets, fishing and hunting locations and sunsets. He was an avid hunter and gun collector. He enjoyed taking ladies and gentlemen at church on wildflower tours, and sightseeing outings. He assisted the church Youth Minister many times by chaperoning youth trips and driving the church bus. It was not uncommon for families at church to “adopt” Chris and invite him into their homes for meals, table games and the thing he enjoyed the most with people, telling stories. Chris was gentle, humble, polite and respectful of others and willing to help anyone in need. His truck served as a moving van for many families. Chris was more intelligent than his college degree would suggest. He had an education in common sense and seeing the true value in people and the things of God’s creation. His sense of gratitude was always on display. He was a good Bible student and teacher. He was awarded the “Outstanding Adult Education Teacher of the Year” by his church in 1989. He enjoyed weekly Bible studies in the homes of church members and everyone knew that Chris’s greatest love was for the Lord, His Word and His people.

Christopher Carl Hazelwood was born on January 12, 1947 in Sherman, Texas to William Carl Hazelwood and Mildred Louise Jones Hazelwood. He passed from his earthly 73 years and 10 months journey on December 08, 2020 while residing at the CARE,... View Obituary & Service Information

The family of Chris Hazelwood created this Life Tributes page to make it easy to share your memories.

Christopher Carl Hazelwood was born on January 12, 1947 in Sherman,...

Send flowers to the Hazelwood family.