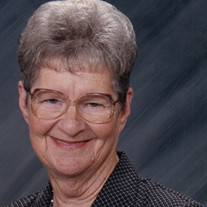 Collene A. Fletcher passed peacefully amongst family in her home on Sunday, March 21, 2021. Collene joins loving parents, Eddie Beene and Mary Misenheimer Beene; husband Wilburn Fletcher; daughter Anna Fletcher; granddaughters Michelle Salinas and Carole Fletcher; brothers Vance (Buddy) Beene and Charles Beene in the eternal and everlasting kingdom of our Lord. She is survived by her children James Fletcher (Sharon), Patricia Curtis, Mary Brown, Thomas Fletcher and Cathy Sanchez (Gilbert); grandchildren Richard Fletcher, Chris Wilson, Rachelle Arias, Talana Vasquez, Shaun Dagenhart, and Melissa Fletcher; 14 great grandchildren and 4 great great grandchildren. Collene was born in January of 1928 in Louann, Arkansas. She was the eldest of three children. After much moving around her family settled down in Odessa, Texas. It was there that she met and later married Wilburn Fletcher in February 1946. She was widowed when her husband of 68 years succumbed to natural causes on March 31, 2014. Collene loved playing cards with her friends, bowling, playing Yahtzee with her family until the wee hours of the morning and spending hours fishing. She was a homemaker until 1964 when she went to work at Levine's Department Store and continued working there for the next ten years. She will always be remembered as a great conversationalist. She never met a stranger. She loved having company and always made everyone feel at home. She was a great cook and shared her favorite meals and desserts with the neighbors. She will be missed by all whom her light shined upon. Visitation services for Collene Fletcher will be held on Tuesday, March 30, from 6pm until 8pm at the Heartland Funeral Home in Comanche, Texas, located at 1508 North Austin St., Comanche, Texas, 76442. Interment of her ashes to Mercer Gap Cemetery, FM 590 S, will be held on March 31, at 11 am.

The family of Collene Fletcher created this Life Tributes page to make it easy to share your memories.

Collene A. Fletcher passed peacefully amongst family in her home...

Send flowers to the Fletcher family.