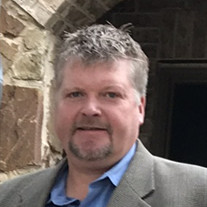 David Kent Lemmons, age 50, of Frisco, passed away on Thursday, March 11, 2021. Services for Kent will be held at 10:00 A.M. on Wednesday, March 17, 2021 in the Heartland Funeral Home Chapel. Burial will follow in the Lost Creek Cemetery near May. The family will receive friends at the funeral home on Tuesday, March 16, 2021 from 6:00 - 8:00 PM. Kent was born on August 26, 1970 in Abilene. He attended high school in Brownwood. After high school, he attended Texas A&M University and Culinary Institute in Scottsdale, Arizona where he received a Bachelor of Arts. He married Sheila Prud'homme Lemmons on September 18, 2010, in Fort Worth, and they began a life together that blessed them with two children. Kent was most proud of his wife and children Mary and Brit, they were the light of his life. His passions included cooking and teaching his children how to cook and football, especially Texas A&M Aggie football. He spent time as a Police Officer before finding his real calling as a chef. During his culinary career, he had the pleasure of meeting Julia Childs. Kent was an excellent chef and brought much joy to many customers, clients and family members. During his cooking career, his biggest challenge was cooking for his wife who didn't care for seafood, mushrooms and nuts. Kent lived life to its fullest, he was larger than life and those around him loved that about him. He was assertive, stubborn and ornery with the most loving and funny demeanor. He didn't take himself too seriously, but he was serious about his family and the ones he loved. He also enjoyed traveling with his family where they went to Washington, D.C, Cabo and Disney World. Kent is survived by his wife, Sheila Lemmons; children, Mary Murphy and Brit Lemmons all of Frisco; father, Fred Lemmons and wife Ester of Early; aunts, Nelda Barnes of Brownwood, Elizabeth Hardy of May, Marcy Richardson of Austin, Carol Lemmons of Brownwood, and Marion Rowe of Abilene; half-sisters, Mandy Guess of Lubbock, Brandy Montgomery of Levelland; and his biological mother, Kandy Price of Bedford. He is also survived by a plethora of cousins, extended family, and a host of friends. He was preceded in death by his mother, Wilma Murphy Lemmons. In lieu of flowers, the family requests that donations be made to SPCA of Texas in Kent's name. https://www.spca.org/memorialgiving

David Kent Lemmons, age 50, of Frisco, passed away on Thursday, March 11, 2021. Services for Kent will be held at 10:00 A.M. on Wednesday, March 17, 2021 in the Heartland Funeral Home Chapel. Burial will follow in the Lost Creek Cemetery near... View Obituary & Service Information

The family of Kent Lemmons created this Life Tributes page to make it easy to share your memories.

David Kent Lemmons, age 50, of Frisco, passed away on Thursday,...

Send flowers to the Lemmons family.