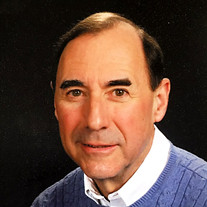 David Eugene Salter, 70, passed away on Sunday, August 23, 2020. Services will be held at First United Methodist Church of Brownwood on Friday, August 28, 2020 at 2 p.m. The service will be broadcast on the First United Methodist Church in Brownwoods facebook page via facebook live. David was born October 13, 1949 to O.L. & Jean Salter. He and his sister Beverly grew up in Port Arthur, Texas, and he graduated from Texas Tech University with a Bachelor of Business Administration. He married Lana Lloyd of Knott, Texas in 1973, and they had two children, Windell and Erica. David began his 43 year career as a Land Man in the Oil & Gas industry with Texaco in Midland, Texas. He later worked for TXO in Midland, Wichita, Kansas, and Oklahoma City, Oklahoma, then spent over 30 years working for Mustang Fuel Company of Oklahoma City. After retiring, he and his wife relocated to Brownwood. His faith and love for people guided his life and he enjoyed sharing God’s love as a worship team member, choir director, Sunday school teacher, and Bible study leader. After moving to Brownwood he volunteered with Good Samaritan Ministries and served as a member of their board. David was a lifetime sports fan who especially enjoyed following the Oklahoma City Thunder and any Texas Tech team. He is survived by his wife, Lana, of Brownwood, Texas; his son, Windell Salter and wife Kristen of Oklahoma City; his daughter Erica Covey and husband Dan of Oklahoma City; his grandchildren Alejandro (AJ) Covey, Brogan Covey, Anna Salter, Camellia (CJ) Covey, Lochlan Salter, and another grandson expected in early 2021; his sister Beverly Sawyer and her husband Dave; his brother-in-law Doug Lloyd and wife Sandy; numerous nephews, nieces, and cousins. He was preceded in death by his parents O.L and Jean Salter and his nephew Chris Sawyer. In lieu of flowers, the family requests that donations be made to Good Samaritan Ministries (P.O. Box 1136, Brownwood, TX 76804) or First United Methodist Church of Brownwood (2500 11th Street, Brownwood, TX 76801).

The family of David Eugene Salter created this Life Tributes page to make it easy to share your memories.

Send flowers to the Salter family.