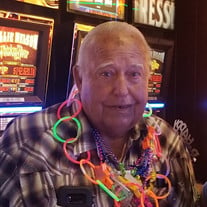 Davy Lee Kelley, age 82 passed away peacefully at his home on Tuesday, December 21, 2021. A graveside service will be 2pm Thursday, December 23rd at the Fairview Cemetery in Grosvenor, under the direction of Heartland Funeral Home. Davy was born on Thursday, September 28, 1939 in Marble Falls, Texas to John and Daisy Kelley. Davy was the eighth child of nine children. He quit school at a very young age to work and help provide for his family which included working in the cotton fields, cedar chopping and any other jobs his father could find for the boys to do. He ended up in Pampa, Texas and met Earlene, they married, he was 17 and she was 16. Davy worked hard all of his life and spent early married life traveling all over the United States, installing infrastructure for cable TV. He eventually landed in the Austin, Texas area working for Time Warner Cable during the day and a mechanic during the night. Davy loved his family more than anything and provided for them well, in spite of his limited education. He could repair and rebuild anything normally resulting in better than its original state. Davy grew up with nothing and was so proud of his accomplishments, occasionally exaggerating them, although there was no need. He was successful, loving and a kindhearted person. Later in years he loved to gamble at the Casinos, going to auctions, flea markets and visiting with people. He was always willing to help anyone with anything and as he aged, he always had time to offer his way of doing things. Davy loved his family especially his grandchildren, his face would light up whenever they were around. Davy is survived by his sister Patsy Cain of Richton, MS; son Randall Kelly and wife Kelly of Brownwood, TX; son-in-law Kirk Johnson of Brownwood, TX; grandsons, Jason Welch and Dalton Kelley of Austin, TX; granddaughter Kerri Kelley Bynum and husband Wes of Boise, ID; great grandson Murphy Bynum of Boise, ID; bonus granddaughters, Valerie, Vanessa and Victoria. He is preceded in death by his wife Helen Earlene Kelly in 2008; daughter Tammy Johnson in early 2021; his parents, numerous brothers and sisters.

Davy Lee Kelley, age 82 passed away peacefully at his home on Tuesday, December 21, 2021. A graveside service will be 2pm Thursday, December 23rd at the Fairview Cemetery in Grosvenor, under the direction of Heartland Funeral Home. Davy was... View Obituary & Service Information

The family of Davy Kelley created this Life Tributes page to make it easy to share your memories.

Davy Lee Kelley, age 82 passed away peacefully at his home on...

Send flowers to the Kelley family.