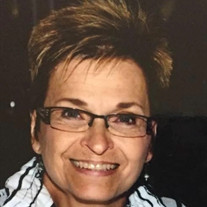 On Thursday, January 7, Debbie Kay Milburn Eoff, wife, teacher, mother, and Nana, 64, from Brownwood, surprised everyone as she entered the gates of Heaven walking, dancing, and probably even running to the feet of Jesus. Debbie was born to Charles and Willie Milburn in Nocona Texas, February 9, 1956. At the age of two, Debbie contracted polio. She spent 9 months in an iron lung and faced multiple surgeries and extensive rehabilitation. Polio may have slowed her down however, it did not stop her. If anyone told Debbie no, this head strong, force of nature, would set out to prove they were wrong, and she did this often. This was evident as she went through high school. As one Senior Personality article had written, “If you want to argue with Debbie Milburn, don’t!!” She was very persuasive. Debbie then attended college at Howard Payne University where she met and married the love of her life, Garry. They were married for 43 years. For 20+ years, Brownwood ISD was Debbie’s mission field. More than just a teacher, she was a mentor, a friend, and a Christ-like example to everyone around her, pushing everyone to be their best while also using her humor to convince them that she was the actual “Little Debbie” that is seen on the snack boxes. For those still students still wondering, it was a joke! Active at Coggin Avenue Baptist Church, Debbie had a fire in her soul for her faith. She emulated the love of God daily. Her life of service kept her involved in the Women’s Ministry Program, leading Bible studies, helping direct Christmas musicals, and teaching Sunday School. In recognition of her service, she was honored as a Girl Scouts of Central Texas Woman of Distinction in 2019. As a mother to two girls, Debbie displayed selfless devotion, limitless sacrifice, and a love that surpassed all understanding. A mother, who all should strive to be like. As much as she loved her girls, her two grandsons, Benson and Stone were the light of her life. Debbie’s face was never brighter than when she would speak about boys and how proud she was of them. Debbie was preceded in death by her parents, Charles F. and Willie Milburn. She is survived by her soulmate Garry, daughters Lacie Henry Petsch and wife Cassi of Leander, Carlie Bishop of Brownwood, grandsons Benson Henry and Stone Bishop, sister Jeanette Hill, brother Mike Milburn and wife Gala, nieces and nephews. Visitation is being held at Coggin Avenue Baptist Church, Monday, January 11, from 6 to 7:30 pm. A celebration of Debbie’s life will be Tuesday, January 12 at 10 am and graveside at Jordan Springs Cemetery in Brownwood Texas, immediately following. The family asks that anyone attending visitation or services, honor Debbie by wearing a mask and be mindful of social distancing. In lieu of flowers, please make any desired donations to Christian Women’s Job Corps or Howard Payne University, Brownwood Texas.

On Thursday, January 7, Debbie Kay Milburn Eoff, wife, teacher, mother, and Nana, 64, from Brownwood, surprised everyone as she entered the gates of Heaven walking, dancing, and probably even running to the feet of Jesus. Debbie was born to... View Obituary & Service Information

The family of Debbie Eoff created this Life Tributes page to make it easy to share your memories.

Send flowers to the Eoff family.