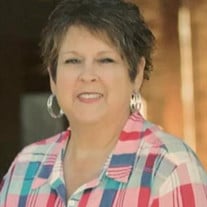 Debbie Worthen, 60, passed away in Dallas on Thursday, April 15, 2021, she was surrounded by her loving family, while watching the Texas Rangers, at the time of her passing. A visitation will be held on Monday, April 19, 2021 from 6 to 8pm at Heartland Funeral Home, Early. A celebration of life will be held on Tuesday, April 20, 2021 at Early Church of Christ at 3pm with a graveside service following at Greenleaf Cemetery. Debbie was born in Kerrville, Texas to George and Barbara (Elam) Cox on September 10, 1960. She grew up in Brownwood, where she graduated from in 1979. She met her husband, Darren Worthen, while working together at Wes-Tex Printing. They married on July 4, 1992. You could find them eating breakfast at Section Hand most days, as Darren got off his night shift and Debbie was on her way to work. They loved watching all of their favorite sports teams together, especially traveling to Arlington to watch the Rangers every season. The thing they loved most of all was spending time loving on their grandbabies. She worked at Wes-Tex for over 20 years where she made lifetime friends, "Sister Friends", who still are close to this day. After a couple of different jobs, she landed her final occupation at Winston Water Cooler. While her job title was office manager, she was better known as "The Mayor" or "The Boss Lady" and was adored by all of the clients that came through the doors. She is survived by her husband, Darren Worthen of Brownwood; son, Derek Worthen and wife Leslie of Mabelvale, Arkansas; daughter, Denise Daub of Brownwood; son, Dustin Worthen and wife Hannah of Little Rock, Arkansas; her six beautiful grandchildren, Brayden Daub, Chloe Worthen, Scott Daub, Liliana Worthen, Brenna Worthen, and Leighton Worthen; brother, Roy Cox and wife Angie of Brownwood; sister, Marie Algerie and husband Mike of Early; step-mom, Colleen Fredrick of Killeen; as well as a multitude of step-sisters, aunts, uncles, nieces, nephews, and cousins that she cherished. She was preceded in death by her parents, George and Barbara Cox.

Debbie Worthen, 60, passed away in Dallas on Thursday, April 15, 2021, she was surrounded by her loving family, while watching the Texas Rangers, at the time of her passing. A visitation will be held on Monday, April 19, 2021 from 6 to 8pm at... View Obituary & Service Information

The family of Debbie Ann Worthen created this Life Tributes page to make it easy to share your memories.

Debbie Worthen, 60, passed away in Dallas on Thursday, April...

Send flowers to the Worthen family.