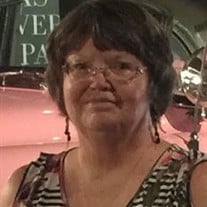 Deborah Ann Horton, age 66, passed away peacefully June 20, 2020 after a short battle with cancer. She was born March 1, 1954 in Merced, California to Weldon O. Horton, Sr. and Betty Jo Horton. Deborah spent her primitive years in Post and Odessa, graduating from Odessa High School in 1972. Deborah was a dedicated mother first and foremost. Her children were her pride and joy, but she especially loved her role as Nana. She loved Elvis Presley, was an avid sports fan, and could be found in the bleachers at every sporting event, yelling loudly. She also devoted much of her time and energy as a caregiver to family members, including her mother and father. Deborah is survived by her son Shane Horton and wife Rebecca of Early, her son Harlan James Morris, III of Early, and her twin daughters, Stacy Morris of New Braunfels, and Tracy Morris of Round Rock. She is also survived by her four grandchildren, Aubrey, Tristan, Averey, and Teagan Horton of Early. Other survivors include her brothers, Michael Horton and wife Carolyn of Lake Brownwood, Weldon O. Horton, Jr. and wife Terry of Rising Star, Truett Horton and wife Terry of Burleson and Andrew Horton and wife Allison of Lake Brownwood, and her many nieces and nephews. She was preceded in death by her mother and father, and twin grandsons Daryon and Dyllon Horton. Family and friends are invited to attend visiting hours on Tuesday, June 23rd from 6:00 p.m. to 8:00 p.m. at Heartland Funeral Home in Early. Graveside services will be held at 11:00 a.m. on Wednesday, June 24th at the Rising Star Cemetery.

The family of Deborah Ann Horton created this Life Tributes page to make it easy to share your memories.

Send flowers to the Horton family.