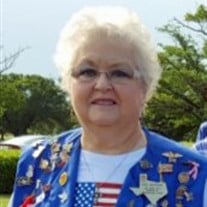 Delores Yvonne “Dee” Denison was born on November 23, 1938 to Frank Parker, and Pauline (Clark) Parker in Grand Prairie, where attended and graduated high school. Dee married Thomas (Tom) Denison on March 10, 1956 in Dallas. She traveled to Germany and Japan with Tom while he was in the military. Dee began her career at VFW Post 3278 Ladies Auxiliary in 1972. She ran the kitchen in the bingo hall for several years, then served as President for 17 years. She was also a member of High Mesa Cowboy Church. Dee is survived by her husband of 65 years, Tom Denison; son, Robert Denison; brother, Bobby Adams of Sewell, New Jersey; sister, Karen McKay of Sewell, New Jersey; a grandchild, Kerry Lee Drew and wife Crystal of Gatesville. She is also survived by two great-grandchildren, numerous sister in-laws, nieces, nephews, and a host of friends. She is preceded in death by her parents; son, Ricky Denison; and sister, Polly Kennedy. Dee passed away on Wednesday, January 20, 2021 at home, surrounded by her family.

The family of Dee Denison created this Life Tributes page to make it easy to share your memories.

Send flowers to the Denison family.