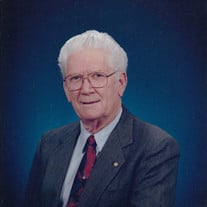 Donald Lewis Brownfield, 87, of Lake Brownwood, passed away on Friday, October 2, 2020. A private family ceremony will be held at a later date. Donald was born April 7, 1933 to Andy and Erma Brownfield in Lubbock, Texas. He graduated from Lubbock Cooper High School and received an associate degree from Draughon’s Business School. Donald married the love of his life, Bobbie Lee Jamison on July 20, 1974. Donald worked in Agriculture building cotton gins and managing them once they were built. He lived in Littlefield, Texas and Oklahoma before moving to Lake Brownwood. Donald loved to fish, or at least he loved to be on the lake. Lee said that there is no telling how many fishing poles Donald dropped in the lake while sleeping out on his fishing trips. Donald was a quiet man who loved to read, study and do math. Donald was a deacon at the May First Baptist Church and served as treasurer. He was active in the Men’s mission and travelled with them to build houses. He also helped build the sanctuary at the church’s location. Donald said he was a quiet man because he couldn’t get a word in around Lee. They enjoyed retired life on the lake spending time with family and grandchildren. Donald is survived by his beloved wife, Lee Brownfield of Lake Brownwood; son Rory Glidewell and wife Larisa of Littlefield; daughter, Gail Barton and husband Bobby of Las Vegas, NV; brother, Kenneth Brownfield of Lubbock; Brother-in-law, Robert Jamison and wife Georgia of Fort Stockton; Sister-in-law, Nancy Brownfield of Big Spring; and three grandchildren, Chris Barton of Las Vegas, Amanda Glidewell-Swain and husband DJ of Ft. Dix, NJ and Taylor Glidewell-Hines and husband Anthony of Plano; 3 great grandchildren, Jaylen, Kobe & Bella. Donald was preceded in death by his son, Gary Brownfield; father, Andrew Brownfield; mother, Erma Brownfield; brothers, Mel and Floyd Brownfield. Online condolences, tributes and memorials can be shared with the family at www.heartlandfuneralhome.net

Donald Lewis Brownfield, 87, of Lake Brownwood, passed away on Friday, October 2, 2020. A private family ceremony will be held at a later date. Donald was born April 7, 1933 to Andy and Erma Brownfield in Lubbock, Texas. He graduated from... View Obituary & Service Information

The family of Donald Lewis Brownfield created this Life Tributes page to make it easy to share your memories.

Donald Lewis Brownfield, 87, of Lake Brownwood, passed away on...

Send flowers to the Brownfield family.