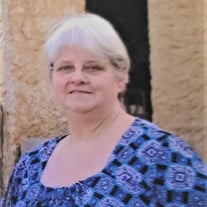 Donna Ann Pope, age 62 of Blackwell, formerly of Brownwood, TX left this world to grace the gates of Heaven and be with her Lord and Savior on Monday, January 3, 2022. Visitation will be from 6 to 8 pm Thursday, January 6th at Heartland Funeral Home in Early. Funeral services will be held at 10 am on Friday, January 7th in the Heartland Funeral Home Chapel with interment to follow at Rocky Creek Cemetery. Donna was born on Thursday, November 5, 1959 in Brownwood, along with her twin brother Donald Turner to parents J. D. and Ann Windham. Donna attended Early High School. She grew up with a passion for cooking and especially baking, she gained those talents from her mother and grandmother. Donna enjoyed cooking so much that she spent over 15 years in the food industry working in the school cafeterias in Brownwood and Wolfforth. Unfortunately, a back injury cut her carrier short and she spent the next few years as a house wife. She went on to work for Handy Tobacco for nearly 20 years. Throughout Donna's adult life she had a great love for fishing, camping and helping others how ever she could, but Donna's greatest love in her life was her grandchildren. In 2012, Donna met her best friend and soul mate James Lynn Clark, and the last 9 years have been the happiest years of her life. With their union brought another child and 3 more grandchildren. She spent as much time with her grandchildren as she could, all 23 of them including her great grands. Donna is survived by her children, Billy Pope and wife Dawn of Brownwood, Krystal Bagby and husband Brandon Bennett of Abilene, Brandi Baird and husband Greg of Merkel, Chris Schwab and wife Becky of Carrolton; brother Donald Turner and wife Beth of Brownwood; sisters, Brenda Windham of Brownwood and Debra Williams of Pensacola, FL; 19 grandchildren and 4 great grandchildren; numerous nieces and nephews. She is preceded in death by her maternal grandparents, Jim and Viola (Houser) VanHuss; parents, Johnnie Douglas Windham, Jim and Annie B. (VanHuss) Turner; brothers, Richard "Rick" Hill and Micheal James Turner; sisters, Betty Reynolds and Paula Prickett; nephew James Henry Turner; and niece Dawn Denise Adams. In lieu of flowers the family requests that donations be made to the Veterans charity at www.mylegion.org

Donna Ann Pope, age 62 of Blackwell, formerly of Brownwood, TX left this world to grace the gates of Heaven and be with her Lord and Savior on Monday, January 3, 2022. Visitation will be from 6 to 8 pm Thursday, January 6th at Heartland Funeral... View Obituary & Service Information

The family of Donna Pope created this Life Tributes page to make it easy to share your memories.

Send flowers to the Pope family.