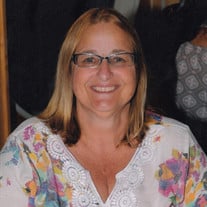 Doris Jeannette Buris, age 58, of Brownwood, gained her angel wings on Monday, August 16, 2021. Jeannette was born on September 16, 1962 in Torrance, California. Jeannette was the sixth of seven children born to Herman Wallace Bardwell & Edna Mae (Weatherford) Banks. She grew up moving back and forth from California to Texas and back. She graduated from Brownwood High School in 1981. Jeannette met the love of her life Timothy Wayne Buris and they married in 1983. During their almost 38 years of marriage, they were blessed with three sons. Jeannette worked in retail and child care until she left to support her husband as a U. S. Navy Wife. She supported her husband during his 22-year naval career. She was a part time single mother, a council to other Navy wives and had a successful career as a school cafeteria manager. She made Memphis, Tennessee, Jacksonville, Florida, Lemoore, California, and Hampton, Virginia her home. After her husband's retirement, they moved back to Brownwood. Jeannette volunteered with the Pecan Valley Genealogy Society, The Greenleaf Cemetery Association, where she was serving as President, as well as the Registration Chair for the Heartland Cruisers Car Club. Jeannette was a Brownwood Lions football fan and rarely missed a football game. Most of all she was a doting grandmother, spoiling her two granddaughters. She loved her family with her whole heart and would do anything to help friends or family. Jeannette was an amazing daughter, sister, wife, mother, grandmother and aunt. She was so proud of her sons and how far those young men have come in life. Jeannette leaves a hole in the lives of her family and friends, as well as her fur babies Harland, Burt, and Pearl. Jeannette is survived by her husband Timothy Buris of Brownwood; her father, Charles Banks of Brownwood, father-in-law Kenneth Buris of Bangs, mother-in-law Martha Childress of Brownwood, sons; Zachery Wayne Buris and Jessica Marie Buris of League City, Micheal Roy Buris of Brownwood, granddaughters Alyssa Buris and Lilly Buris, sisters, Cheryl Franks and husband Rex of Brownwood, Dianne Graham and husband Charlie of Glendale, Jackie Carmack of Junction, Darla Chriswell and husband Doug of Tennessee, Nancy Bardwell of Blytheville, Arkansas, step-siblings, Nelda Pott and husband Allen of Brownwood, Andrea Thompson and husband Mike of Burleson, Melissa Carroll and husband Richard of Azle, and Chuck Banks and wife Brandy of Cleburne, sister-in-law Vicki Ehlers and husband David of Lubbock, brothers in law Joe Medley and wife Darla of Brownwood, James Medley of Amarillo and many aunts, uncles, nieces, nephews, great nieces and nephews. Jeannette was preceded in death by a son, Cory Buris, her mother, Edna Mae Banks, her father, Herman Wallace Bardwell, her brothers, Jody Bardwell, Tommy Joe Bardwell, Walter Bardwell, Robert Earl Bardwell, Wallace Glenn Bardwell and Randy Dale Bardwell, her grandparents, Leona Harper, Hershel Fred Weatherford, William G. Bardwell Sr., and Effie Carlisle.

The family of Jeannette Buris created this Life Tributes page to make it easy to share your memories.

Send flowers to the Buris family.