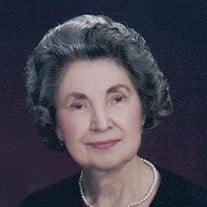 Dorothy M. Page passed peacefully from this life into the presence of Jesus at 3:25 AM on December 6, 2020 at the age of 93. Death was due to natural causes. Dorothy Mae Jones was born in Big Spring, Texas on March 5, 1927. After a short time in Big Spring, her family moved to Sweetwater for a number of years, where she attended elementary school. She later lived in rural Gaines County, where she attended and graduated from Loveland School, which housed all (at that time) 11 grades in one room, then rural Dawson County before the family moved to Lamesa. Of special note is the remembrance that she substituted for the teacher, Mrs. Esther Dark, on those occasions when Mrs. Dark was out. She married Weldon E. Page on January 2, 1950, and they continued to live in Lamesa and raise their family together until moving to Brownwood in 1972. She was a member of Coggin Avenue Baptist Church in Brownwood. Dorothy was known for being quite adventurous. After graduating from high school, she undertook a famous (within the family, at least) trip from Lamesa to Portland, Oregon to live for almost two years with Aunt Lois Bean. During that time, she worked as a bicycle messenger for a bank and later worked for Sears, Roebuck, and Company. While at Sears, she met two other young ladies who turned out to be lifelong friends, Jane Knutsen and Laurel Westerlund. Her time in Portland was during the waning years of World War II, and the trio were frequent hosts at USO dances in the city These friends maintained that friendship all these years through the art of letter writing. The entire family looked forward to reading the letters any time we were in Brownwood. She later worked as the “upstairs cashier” at the C.R. Anthony store in Lamesa, making change for the staff working on the main floor. Her courtship with Weldon continued to involve adventure. It might have been flying in a small airplane with Weldon at the controls, investigating of whether it was really possible to drive a car with the wheels on the rails of the local railroad track, or visiting Carlsbad Caverns on the day they became engaged. They celebrated their 70th wedding anniversary on January 2, 2020. She is survived by her husband of just short of 71 years and by three “kids” and one grandchild, son Larry and his wife Kaylar of Plano, daughter Patty and her husband Roy Curbo of Brownwood, son Douglas and his wife Annette of McKinney, and granddaughter Laurel, also of McKinney. She is also survived by her younger brother Ralph T. Jones and his wife Janelle of Denison and numerous cousins, nieces, and nephews. Dorothy was preceded in death by her parents, Leslie Vestal Jones and Ruth Mary Reeves Jones, and her older brothers, Eugene Jones and Alton Jones. She considered that her most important legacy is that her entire family consists of faithful believers in the saving grace and lordship of our Savior, Jesus Christ. Service details are currently being developed.

Dorothy M. Page passed peacefully from this life into the presence of Jesus at 3:25 AM on December 6, 2020 at the age of 93. Death was due to natural causes. Dorothy Mae Jones was born in Big Spring, Texas on March 5, 1927. After a short time... View Obituary & Service Information

The family of Mrs. Dorothy Mae Page created this Life Tributes page to make it easy to share your memories.

Dorothy M. Page passed peacefully from this life into the presence...

Send flowers to the Page family.