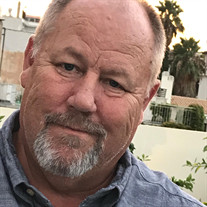 Eddie Don Ailshie was born September 20, 1958, in Brownfield, Texas. He passed away August 31, 2020, at the age of 61 in Temple, Texas. He and his wife resided in Early, Texas. Eddie was raised in Brownfield, Texas and graduated from Brownfield High School in 1977. During his junior year in high school he met the love of his life Jeanne, they became high school sweethearts and were married in 1978 in Brownfield. He surrendered to the ministry in 1977. Throughout his ministry, he served as a youth minister, pastor, and foreign missionary to Brazil. He pastored several churches in Texas in Funston and Abilene. He and his family then moved to Brazil as missionaries from 1992 – 1999. Afterwards, he returned to pastor at Early First Baptist Church. He pastored in Early for 20 years. For the past 16 years, one of his greatest joys was serving as the voice of the Early Longhorns Football. He was also a moderator for the Heart of Texas network. Brazil remained a special place in Eddie’s heart. He continued leading teams back to Brazil to continue mission work. In June 2020, Eddie and his wife Jeanne celebrated 42 years of marriage. Eddie and Jeanne enjoyed spending time with they have two grown sons and their families and especially the 7 grandkids that called him Pops. Eddie was preceded in death by his mom, Greta Ailshie, and his dad, Don Layand, and his grandmother, Paulette Howell. He is survived by his wife Jeanne Ailshie of Early, his brother, Joe Layand of Anaheim, and his two sons and their families, Zack Ailshie and his wife Leslie of Glen Cove, and Chris Ailshie and his wife Marlena of Fort Worth. And above all, he was the best Pops to his seven grandkids, Keiana, Analia, Meilani, Eli, Maddy, Jonah, and Micah. The family will receive friends on Friday evening, September 4, 2020, from 5:30 -7:30, at Heartland Funeral Home. A funeral service will be held at 11:00 am Saturday, September 5, 2020, at Early First Baptist Church. The funeral service will be live streamed on First Baptist Church Early Texas Facebook page. One of Eddie’s greatest passions was to make sure people were fed spiritually and physically. In lieu of flowers, donations to Community Meals in Early would be greatly appreciated.

The family of Brother Eddie Ailshie created this Life Tributes page to make it easy to share your memories.

Send flowers to the Ailshie family.