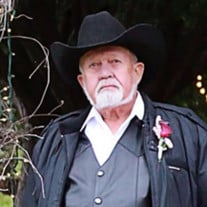 Eddie Joe Flippin was born on November 28, 1941, in Pioneer, Texas, and passed away on December 1, 2021, in Brownwood. He lived most of his life in the Cross Plains area and attended school in Cross Plains and Andrews. He enlisted in the Army at age 17. As part of his military service, he was later stationed at a US Army base in Stuttgart, West Germany, where he was a Military Police Officer. Shortly before going overseas, he married Gail Lynn Rutledge in 1959. He was a welder and pipefitter and worked most of his life at the 3M plant in Brownwood. He also worked on various construction projects in several places in the U.S., including several stints north of the Arctic Circle in Alaska. In addition to his love for the outdoors, particularly hunting and fishing, he also had many hobbies that occupied him over the years, including gardening, trapping, making Crappie jigs, playing golf, riding motorcycles and trikes, photography, metal detecting, and building Purple Martin nests. He was a Mason, a member of the Scottish Rite, and a Shriner. He is survived by his wife, Margie (Sissy), of 15 years and three children: Tancrede (Tan) and wife Janet of Granbury, Tye and wife Chelsey of Brownwood, and Tamara Alexander and husband Justin of Buffalo Gap. He is also survived by six grandchildren: Drew Flippin of Chicago, Illinois, Erin King and husband Aaron of Jonesboro, Arkansas, Mason Flippin of College Station, Jaci Alexander of Lubbock, Jaden Alexander of Buffalo Gap, and Grayson Dempsey of Brownwood. He is also survived by two great-grandchildren-Sam and Melody King of Jonesboro, Arkansas. He was preceded in death by his parents, Tom Flippin and Winnie (Stacy) Flippin, and siblings Dow, George, Alvin, Pearl, and Jackie. He is survived by his sister Wanda and husband Don of Early and brother Freddie and wife Victoria of Fort Worth. Visitation will be at Heartland Funeral Home in Early on Friday from 6:00-8:00 p.m., with a graveside service on Saturday at 10:00 a.m. at the Pioneer Cemetery, located midway between Cross Plains and Rising Star.

Eddie Joe Flippin was born on November 28, 1941, in Pioneer, Texas, and passed away on December 1, 2021, in Brownwood. He lived most of his life in the Cross Plains area and attended school in Cross Plains and Andrews. He enlisted in the... View Obituary & Service Information

The family of E.J. "Flip" Flippin created this Life Tributes page to make it easy to share your memories.

Send flowers to the Flippin family.