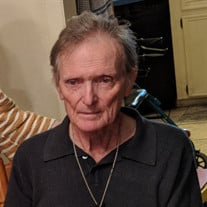 Edward Verl Hallmark, known as Verl by all who loved him, age 81 of Early, passed away peacefully on Thursday, December 23, 2021, in the early afternoon. His lifelong sweetheart and wife of more than 59 years, Nikki Hurst Hallmark, was by his side and his two children, Gary and Cathy, were nearby. Verl was born on June 22, 1940, in Gorman, Texas, the eldest surviving son of Jess and Irene Hallmark. He graduated from Rotan High School and went on to successfully pursue a bachelor's degree in accounting from Tarleton State College, which led to a prosperous career taking him from Abilene to Austin and then Brownwood, before retiring for the last time in Early, Texas in the early 2000s. He was a man of many talents, which included being a pilot, realtor, rancher, author, CPA, controller, business owner, deacon, cowboy, and friend to many. He met his match and married co-pilot Nikki on September 15, 1962. Their son, Gary, was born in Rotan, Texas, in July 1963. Their daughter, Cathy, was born in Gorman, Texas, in July 1968. An infant son, Ronnie, was lost in between. Verl was a man of deep faith with an abiding love for Christ and family. He was previously active as a Baptist deacon and led numerous bible study groups. He volunteered his time to work with multiple charitable organizations with a focus on those helping children. He also was a writer who enjoyed being a member of local writing groups with several award-winning short stories and essays. His favorite subject was the Misty Meadow, a fictional setting for his endearing children's stories. Among his greatest joys were his five grandchildren: Alaina, Bailey, Max, January, and Gillian. He will be greatly missed by many. Verl is preceded in death by his mother, Irene Sharp Hallmark; his father, Jess Hallmark; sisters Wilma Cordell and Carolyn Reed; and brothers Troy and Ronnie. Verl is survived by his wife Nikki Hallmark of Early, Texas; his brother Jimmy Hallmark and his wife Vickie of Early, Texas; his son Gary Hallmark and his wife Elizabeth of Austin, Texas; his daughter Cathy McPhee and her husband Mark of Early, Texas; his grandchildren Alaina Hallmark Meaux and her husband Andrew, Bailey Hallmark, Max McPhee, January McPhee, and Gillian McPhee; his great-granddaughter Lilah Meaux; and his beloved dog Buddy, who was a favorite visitor at Pecan Bayou Nursing and Rehab. Memorial services will not be held at this time due to current pandemic concerns. A celebration of life will be held at a later date. The family wishes to thank all of Verl's family and friends for their enduring support, heartfelt prayers, love, and devoted friendship during this difficult time. Special thanks also to the caring staff and nurses at Solaris Hospice in Brownwood and Pecan Bayou Nursing and Rehab, with particular gratitude to Kelly Stevens, Frances Barron, and Bobby Meachum with Solaris Hospice and to Jessica Purcell, an angel in human form at Pecan Bayou Nursing and Rehab, who looked after "Pop" as if he were her own family, and to Hunter Stanford and Darryl Goerdel, who provided excellent care. May God Bless You All.

Edward Verl Hallmark, known as Verl by all who loved him, age 81 of Early, passed away peacefully on Thursday, December 23, 2021, in the early afternoon. His lifelong sweetheart and wife of more than 59 years, Nikki Hurst Hallmark, was by his... View Obituary & Service Information

The family of Verl Hallmark created this Life Tributes page to make it easy to share your memories.

Edward Verl Hallmark, known as Verl by all who loved him, age...

Send flowers to the Hallmark family.