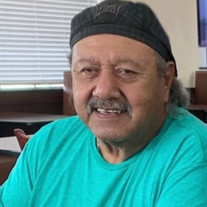 Efrain “Wimpy” B. Garcia Jr., 70 of Brownwood, TX passed away on Sunday, January 31, 2021 in Steubenville, Ohio surrounded by his family.  Wimpy was born Sunday, January 28, 1951 in Sonora, Texas to Efraim B. Garcia Sr. and Rosa Garcia.  He graduated from Del Rio High School.  Wimpy married Jeannette Perry on July 4, 1981 in Brownwood and began a life together that blessed them with 10 children.   Wimpy was a friend to all. He never met a stranger throughout his life. He possessed the gift of seeing the best in people. He paired his accepting personality with knowledge and wisdom that he was quick to share with anyone. Looking for opportunities to love and help others came naturally to him. He never turned down someone in need. His passion for people also carried into his hobbies. Garage sales and flea markets were the highlight of his Sunday’s. Other hobbies included collecting rocks, marbles, cameras, music players, and antique cars. However, he valued family more than anything, because he had family everywhere, he never felt far from home.  Quality time with family included listening to his grandchildren sing, going to their sports events, and admiring their art. Nothing brought Wimpy more joy than his family. He was their rock providing for them until the very end. Putting family first gained him respect and admiration from all. His love for his children and grandchildren was shadowed by his immense love for his wife. He set the standard of what it meant to be a husband, father, and friend. Efrain is survived by his wife Jeannette Garcia of Brownwood, TX; daughters, Diana Rangel and husband John of Bangs, TX, Jackie Perry and fiancé Anthony Conley of Ft. Worth, TX, Dezirae Garcia of Brownwood, TX, Karon Boyd and husband Tony of Euless, TX; sons, Justin Garcia of Brownwood, TX, Jake Garcia and wife Lee Ann of Brownwood, TX; 15 grandchildren and 3 great grandkids; and a host of nieces, nephews, other family and friends. He is proceeded in death by his father Efraim B. Garcia Sr.; mother Rosa Flores Esquivel; daughters, Belinda Garcia and Christy Garcia; sons, Efrain Garcia III and James Garcia; granddaughter Darlene Frias; sister Yvette Garcia and brother Phillip Garcia.

The family of Efrain "Wimpy" B Garcia, Jr created this Life Tributes page to make it easy to share your memories.

Send flowers to the Garcia family.