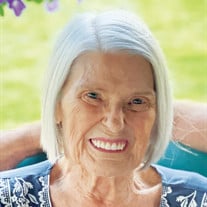 On Monday, August 30, 2021, Elizabeth Joel Phillips Holladay, loving wife, mother of four children, beloved grandmother and great-grandmother, passed away at the age of 89. Elizabeth was born on November 2, 1931 in Haskell, Texas to parents Fred T. and Ruth Phillips. She attended Water Valley High School then went on to study at Hardin-Simmons University where she was active in volleyball and softball. Elizabeth graduated in May of 1953 with a Bachelor of Science degree before moving to Imperial, Texas. That very same autumn, Elizabeth married Grover Cleveland Holladay. Elizabeth and Grover married on November 25, 1953 in Water Valley, Texas. Together they raised one daughter, Freddie, and three sons, Joe, Kerry and Thomas in Imperial, Texas. Elizabeth taught for 30 years, finding the most joy teaching Kindergarten, which she was able to do for the last 18 years before retiring. After retiring in May 1992, Elizabeth and Grover, now grandparents, enjoyed many fishing trips and other fun times with their grandchildren. Elizabeth was preceded in death by Grover, who passed away on February 27, 2010. Elizabeth is survived by children, Freddie Murphy and her husband Joe, Joe and his wife Brenda, Kerry, Thomas and his wife Kerri, hanai son, Joseph, grandchildren, Brandon, Matthew and his wife Rachel, Sammy and his wife Kayla, Brian and his wife Sarah Grace, great-grandchildren, Cole, Cade, Matthew, Noah, Grover and Hudson. Memorials can be made to West Texas Boys Ranch, 10223 Boys Ranch Road, San Angelo, Texas 76904

The family of Elizabeth Holladay created this Life Tributes page to make it easy to share your memories.

Send flowers to the Holladay family.