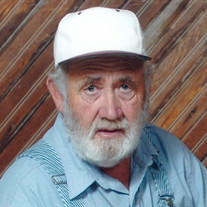 Emil Luedecke, age 72, of Zephyr, Texas, died Monday, May 25, 2020 after a long and fierce battle with cancer. Emil Dwight Luedecke was born in Shiner, Texas on December 20, 1947. At eighteen months of age he went to live with his grandparents, moving with them to Zephyr in 1951. They were active members of the Church of Christ. Through their guidance, Emil accepted Jesus Christ as his savior and was baptized at the Austin Avenue Church of Christ in early 1961. He continued to be active in the Church of Christ and a well-respected community member until his passing. Emil graduated from the Zephyr High School in 1967. Raised as a farmer, he worked a variety of jobs in Brown County until 1969 when he began a twenty-year employment with Santa Fe Railway. After retiring from the railroad in 1988, Emil returned to farming and ranching, using the Border Collie as his top ranch hand. In 1990, Emil developed an interest in raising and training his dogs for competition. In 1993, he traveled to Great Britain, purchasing two dogs. He chose to keep the dog named Tyne; this began the lifelong legacy of his unbroken line of quality working dogs. Emil went on to win multiple competitions throughout the United States with descendants of Tyne, Ben, Spot and Zac. His line of dogs are sought after by sheepdog competitors and farmers/ranchers alike. Emil was a respected community member, sheepdog handler, judge and committee member of organizations representing the working Border Collie and livestock. He served multiple terms on the board of directors for the United States Border Collie Handlers Association, the American Border Collie Association, the Texas Sheepdog Association and was president of the Brown County Livestock Producers Association for many years. The dogs were, in Emil’s words, “a tremendous asset, enriching my life with the opportunity to meet new people and make friends throughout the USA”. In 2014, Emil was granted the prestigious honor of induction into the Border Collie Hall of Fame, only the 12th person to be bestowed the honor since it’s inception in 1998. Emil has been described as kind, quiet, soft-spoken, unassuming, independent, hardworking and loyal. Most importantly, he was described as a child of God. The world was a better place for Emil being in it. He leaves behind his brother, Jimmie Luedecke and sister-in-law Margaret Luedecke of Zephyr. He also leaves behind the endless number of lives that he touched; the many who called him friend. In lieu of flowers, the family request memorials be made to the American Border Collie Association, PO Box 535, Pine Mountain, Georgia, 31822.

Emil Luedecke, age 72, of Zephyr, Texas, died Monday, May 25, 2020 after a long and fierce battle with cancer. Emil Dwight Luedecke was born in Shiner, Texas on December 20, 1947. At eighteen months of age he went to live with his grandparents,... View Obituary & Service Information

The family of Emil D. Luedecke created this Life Tributes page to make it easy to share your memories.

Send flowers to the Luedecke family.