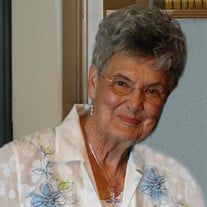 Ernett Estelle Lancaster Chrane, 89, passed away peacefully the morning of Sunday, Aug. 1. Services will take place at 10 A.M. Friday, Aug. 6, at Heartland Funeral Home in Early, followed by interment at Eastlawn Memorial Park. She will lie in state Thursday, Aug. 5, for come-and-go visitation at Heartland. Ernett was born in Brownwood on May 14, 1932. She was one of eight children born to Louis and Bertha Lancaster. Ernett went to school in Early, where she played basketball and was a cheerleader. She married R.V. Chrane the night before he shipped off for the Navy. They were together 51 years until his death in 1999. R.V. and Ernett had two daughters - Sharee Louise Fowler Bailey and Lanette Fawn Harlow - both of whom preceded her in death. Ernett was a member of Coggin Avenue Baptist Church, and she retired from the City of Brownwood's Purchasing Department. She enjoyed sewing, shopping, cooking, and hosting a get-together for any reason at all. She was generous and loving, patient and forgiving. She never said "no" to a family member or neighbor in need. Affectionately known as Gran-Gran, Ernett is survived by three grandchildren, Summer Fowler Huggins of Austin, Taj Chrane of Early, and Tanner Harlow of Early; as well as brother Jerry Don Lancaster and sister Grace Gray both of Brownwood. She had four great-grandchildren and so many beloved nieces and nephews. In addition to her parents, husband and daughters, Ernett is preceded in death by five siblings; brothers L.B. Lancaster, Herman Lancaster and Carroll Lancaster; and sisters Virginia Moss and Dorothy "Dot" Lancaster. During this time, her family and friends are remembering her favorite scripture, 1 Corinthians 13: "Love is patient; love is kind. It does not boast; it is not proud. It does not dishonor others; it is not self-seeking. It is not easily angered and it keeps no record of wrongs." This is very much how Gran-Gran lived her life.

The family of Ernett Estelle Chrane created this Life Tributes page to make it easy to share your memories.

Send flowers to the Chrane family.