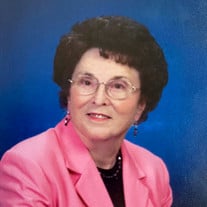 Evelyn L. Hutchings of Blanket, Texas passed away peacefully on August 27, 2020 in Glen Rose. Mrs. Hutchings was born March 5, 1931 in Mullin, Texas to the late Marshall Lee and Lula Elizabeth (Carlisle) Ethridge. She was raised in Mills County and graduated from Mullin High School. She married James Newton Hutchings on October 10, 1948 in Ft. Worth. They moved to Blanket where she lived for 60 years farming and ranching. Evelyn made sure the ranch hands were fed well with an assortment of fried foods. After being told that they couldn’t have children, daughter Therisa arrived and Evelyn spent her life supporting her activities including rodeoing, cheerleading and showing livestock. She attended Central Texas Commercial College and worked at Safeway before going to work at cattle auctions. She then started working in the banking industry as a cashier for several financial institutions including Sunbelt Savings, Bank of America and Texas Bank. She retired in April of 2005 as the public relations representative and assistant cashier for Mills County State Bank after 10 years of service. During this time, she covered many checks for people until they could get back in the good graces of the bank – namely her grandsons and their friends. Evelyn received the Early Chamber of Commerce lifetime achievement award in 2008. In addition, she was named Chamber board member of the year in 2001, Early Citizen of the Year in 2000 and Early Ambassador of the Year in 2006. She was named the Girl Scouts Heart of Texas Council’s “Women of Distinction” for 2007. She was a member of the United Methodist Church of Blanket and received a certificate of appreciation from the church in 2003. Evelyn had a lifelong love of fishing and passed that on to her family and many others that fished at one of her tanks. Those that visited her house could always be guaranteed a cold Snickers bar and Dr. Pepper. She was preceded in death by her parents, husband and sister-in-law Millie Stuck. Survivors include her daughter, Therisa Merritt and husband Herman of Glen Rose; grandchildren – Tohma Morrison, wife Heather and their son Rylan of Pearland; Tanner Morrison and his daughter Blazelyn of Midland and Tory Morrison, Heather, Jace, Slate and Avery of Sterling City; Seth Merritt and wife Erin of Abilene; and Whitney Merritt of McKinney; and sister Sue Lucas of Brownwood. She is also survived by numerous nieces, nephews, cousins and close friends. Because of the ongoing health situation, Evelyn will be laid to rest in a private family graveside service. In lieu of flowers, the family requests that you make donations in Evelyn’s name to the Blanket United Methodist Church, the Blanket Cemetery (8600 CR 326, Blanket, TX 76432) or the Blanket Ex Students Association scholarship fund (9101 CR 360, Blanket, TX 76432). Funeral services are under the direction of Heartland Funeral Home.

The family of Evelyn Hutchings created this Life Tributes page to make it easy to share your memories.

Send flowers to the Hutchings family.