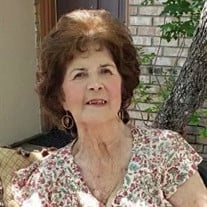 Anne Jenkins, beloved mother, grandmother and great-grandmother went to be with the Lord on Monday, March 22 at her home in Brownwood, Texas at the age of 85. Anne was born in Bloomfield, Missouri on June 23, 1935 to Hazel and Frank Brown. Anne grew up in Bloomfield and attended William Jewell College where she met and married Carl Allen Jenkins. Ann and Al transferred to Ole Miss where Anne was a member of Alpha Delta Pi Sorority and graduated with a BBA. Anne and Al lived in Houston, El Paso, and then settled in Odessa, Texas where they were co-owners of several businesses including: Custom Mailers, Smokers Outlet, Inc., Netwest Online, Inc., and 4-A Management, Inc. Anne was a very energetic and diligent business woman. While living in Odessa, Anne was an active member of the Junior League of Odessa and the Permian Study Club. After moving to Brownwood, Anne was a member of the First Methodist Church of Lake Brownwood and later the Baptist Church at Coggin Avenue, Brownwood. Anne was also a member of the Republican Women's Club. Anne's family was her priority and she enjoyed traveling with each of them. Anne particularly enjoyed their Ruidoso home and made years of happy memories there. Our Mimi was one of a kind! From Proverbs 31:26 "She speaks with wisdom and faithful instruction is on her tongue." Anne was preceded in death by her parents, her sister, Jean, and her husband, Al. Anne is survived by her son, Carl Allen Jenkins, Jr. and wife, Jolie of South Padre Island; daughter, Alissa Goates and husband Dr. James Goates of Odessa; sister-in-law, Dorothy Burleigh of Lafayette, LA; grandchildren, Dylan Jenkins and wife, Shelby of Willis, Colton Jenkins and wife, Taylor; and Cailen Jenkins all of Odessa; Ali Ashley Blasi and husband, Matthew of Frisco; Jordan Goates and wife, Elsbeth of Carrollton, and great-grandchildren, Alivia Anne and Arabella Kate Blasi of Frisco, Brynley, Bice, Brax & Brody Jenkins of Willis, Texas. Visitation will be at Heartland Funeral Home in Early, Texas on Friday, March 26, from 6:00-8:00. Graveside services will be Saturday, March 27, and 2:00 p.m. at Sunset Memorial Gardens, Odessa, Texas. Donnie Williams of The Bridge, Odessa will be officiating. Memorials may be made to the charity of your choice.

Anne Jenkins, beloved mother, grandmother and great-grandmother went to be with the Lord on Monday, March 22 at her home in Brownwood, Texas at the age of 85. Anne was born in Bloomfield, Missouri on June 23, 1935 to Hazel and Frank Brown.... View Obituary & Service Information

The family of Anne Jenkins created this Life Tributes page to make it easy to share your memories.

Send flowers to the Jenkins family.