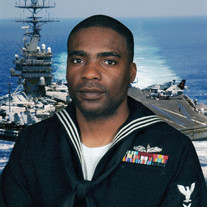 Frank Aaron Fletcher III, 42, of Brownwood passed away Thursday, May 14, 2020. A visitation is planned at Heartland Funeral Home from 6:00 – 8:00 PM Friday, May 22, 2020. A funeral service will be held at 1:00 PM, Saturday, May 23, 2020 in the Heartland Funeral Home Chapel with interment to follow at Eastlawn Memorial Park in Early, Texas. Aaron was born April 10, 1978 to Frank Fletcher Jr. and Corliss Bedford. He graduated rom Brownwood High School. Aaron received a bachelors degree from San Diego State University and joined the United States Navy. Aaron served in the Navy more than 10 years, completing four tours of duty. He was stationed in Hawaii and California when not at war. Aaron loved sports, watching and playing. President Obama visited his station and watched a game where Aaron’s team played against another Navy team for the President. Aaron loved to watch the Rockets play basketball, the Texans play football and he loved to go to sports activities that his children were involved in. He enjoyed working out at the gym, meditation and yoga. He took pride in going to church, quoting scriptures and praying with friends & family. Aaron loved his family. Even though his work in the military took him away many times, when he was with them, he always made it special and let them know that he loved them. Aaron attended church with his wife at Primera Iglesia Bautista in Brownwood. Aaron was a wonderful loving husband, son, brother and father. He was always thinking of ways to help others whether it was physically helping someone or spiritually helping people through prayer. He always provided for his family, He was a man of great faith in God and will be deeply missed by all who knew him. Aaron is survived by his beloved wife, Angeline Fletcher of Brownwood; sons, Gavin Jefferson, Adrian Salazar and Josiah Gonzalez of Brownwood; daughter, Chloe Fletcher & Selah Fletcher of Brownwood; mother, Corliss Bedford of Houston; father, Frank Fletcher Jr. & Paula Holbert of Bangs; sisters, Sharay Holbert of Ardmore Oklahoma & Adrienne Bedford of Houston; nieces, Daja Holbert of Brownwood & Loreal Mast of Houston; nephew Aiden Reddic of Houston. Aaron was preceded in death by his mother-in-law, Virginia Gonzalez; grandfather, Frank Fletcher Sr.; step grandfather, Jason Stagg; uncle, Jerome Brown; nephew, Da'jon Holbert. Condolences, tributes & memorials can be given to the family at www.heartlandfuneralhome.net

The family of Frank Aaron Fletcher, III created this Life Tributes page to make it easy to share your memories.

Send flowers to the Fletcher family.