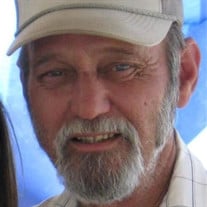 Fred Allen (“Shorty”) Westerman died peacefully in his home on December 8, 2020. He was 67 years old. Fred was born on February 16, 1953, to Okla Homa Westerman and Merle (Woodfin) Westerman. Fred had an outsized personality and was known for his quick wit, jokes, and propensity to entertain a crowd with stories, country singing, and guitar pickin'. He loved playing baseball and rarely turned down a game of darts, washers, or dominoes. Fred was handy and hilariously resourceful. He could build anything out of just about anything, including stilts made from wheelbarrow handles, and a bus stop for his kids out of dilapidated wood and sheet metal. He raised countless animals on his property over the years, and his children and grandchildren loved to feed the cows and chase the barn cats. He even managed to warm to the pomeranians and chihuahuas (eventually). He especially shined as a beloved Papaw, taking the grandkids on hayrides around the property, building zip lines for them, and making sleds out of cardboard when there was snow or ice. The only competition with Fred’s personality was his work ethic. He proudly worked at 3M for over 40 years, rarely missing work and saving sick time until he was forced to take it or lose it. One of his favorite responses to a complaining kid was, “Welcome to the real world.” Though this mini-lecture was usually received with eye rolls, this was just one of the many ways he instilled the value of hard work into his kids and grandkids. He made no excuses, worked hard for his accomplishments, and shared his respect and admiration for others who did the same. Fred is survived by his wife, Cindy (Sotelo) Westerman; children and step-children, Keith Westerman, Tanya Westerman Shaw (Trey), BJ Sotelo (Brandy), Kelli Westerman Maestas (Ryan), Tressa Westerman Arbow (Ryan), Donna Moulton, Robert White, Danny Sotelo (Vianey), Tony Sotelo (Malissa); numerous grandchildren, great-grandchildren, nieces, nephews, and countless family friends. He was preceded in death by his parents; his son, Tony Allen; six siblings, Elmore Westerman, JoAnn Cunningham, Carolyn McAlister, Grace Gilbert, Larry Westerman, and Phillip Westerman.

The family of Fred Allen "Shorty" Westerman created this Life Tributes page to make it easy to share your memories.

Fred Allen (“Shorty”) Westerman died peacefully in his home on...

Send flowers to the Westerman family.