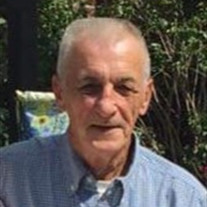 Gary Russell Kinkade returned to his heavenly home May 28, 2021 at the age of 79 under the care of Solaris Hospice and Care, Inc. in Early, Texas. Though he had been battling serious medical issues over the past few months, even at the end Gary maintained his quirky sense of humor and his love of chocolate malts "extra malt". Born in Arroyo Grande, California on August 11, 1941 during WWII to Russell Brown and Ella Marie (Davis) Kinkade. Gary spent his childhood in Wichita, Kansas and on his grandparents farm in Holton, Kansas. As a child he was an adventurous and mischievous spirit who loved to tinker with things. After graduating from Wichita East High School Gary married Michelle Fisher and they had a son. Later Gary enlisted in the US Army, deployed to Vietnam in the Air Cavalry Division and served as door gunner and crew chief. Never one to back-down when needed, he was the recipient of the Distinguished Flying Cross, Soldiers Medal, and 2 Bronze Stars. Upon return from Vietnam attended Washburn University in Topeka, Kansas graduating in 1973 with a Bachelor of Business. Shortly after he left for Dallas where Gary met the love of his life, Janice Ruth (Spindel) at Oaklawn United Methodist Church where they both sang in the choir. Gary and Jan were married on December 20, 1975 at Mullin United Methodist Church. All together they had three children: Rhett, January and Jason. A resident of Brownwood, Texas since 1983 Gary was active member of Cental United Methosdist Church and Order of Odd Fellows. He is survived by his wife Jan Kinkade of Brownwood, Texas, son Rhett Kinkade of Victoria, Texas (Belinda), daughter January Al-Zouhbi of Green Valley, California (Niazi), son Jason Kinkade of Brownwood, Texas, granddaughters Haley Kinkade of Victoria, Texas, Zoe Al-Zouhbi of Green Valley, California, Ava Kinkade of Brownwood, Texas, Poppy Kinkade of Brownwood, Texas, sister Frances Smith of Manhattan, Kansas, brother-in-law Bob Stapel of Topeka, Kansas and several beloved nieces and nephews. Gary was preceeded in death by his parents Russell and Ella Kinkade, sister Twila Stapel, brother-in-law Jim Smith, aunt Maybelle Shoebrook, aunt Cazella Lamb, and uncle Eugene "Buck" Davis. A memorial will be held at Brownwood Central United Methodist Church on Thurday June 10th at 11:00am. In lieu of flowers contributions to Central United Methodist Church or VFW Post #3278 (2300 Austin Ave) would be appreciated.

Gary Russell Kinkade returned to his heavenly home May 28, 2021 at the age of 79 under the care of Solaris Hospice and Care, Inc. in Early, Texas. Though he had been battling serious medical issues over the past few months, even at the end... View Obituary & Service Information

The family of Gary R. Kinkade created this Life Tributes page to make it easy to share your memories.

Send flowers to the Kinkade family.