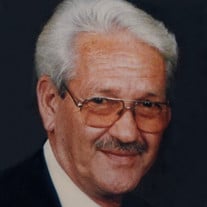 Gearold Keith Ledsome, 81, of Early, passed away Monday, December 1, 2020. A visitation with family will be held at Heartland Funeral Home from 1:00 – 3:00 PM, Friday, December 4, 2020. A graveside service will be held at 3:00 PM Immediately after the visitation in Eastlawn Memorial Park cemetery officiated by Bill Slaymaker. Keith was born December 9, 1938 in West Virginia to Clyde and Ruth Ledsome. He attended Spencer High School in West Virginia. Keith joined the US Navy after high school. While serving in the Navy he learned to work with metals, engineering things and found a passion that would last a lifetime. Once he left the Navy, Keith attended Lincoln Welding School in Canton, Ohio adding another skill that he would use the rest of his life. He had the mind of an engineer building and making things used by companies all over the country. Keith married the love of his life, Joann Steele, September 5, 1959 in Hereford, North Carolina. They eventually mad their way to Brownwood where Keith started Ledsome Machine and Welding. Joann and he were blessed with three boys. Keith loved to work and instilled that work ethic into his children as well. He enjoyed Bar-B-Qing and he was the cook, cooking on the same grill for almost 50 years. He spent his off-time fishing, water skiing and really anything out doors or on the water. He managed his own business for 34 years, owned and managed a Pecan farm and was a jack of all trades. He was very proud that he did his duty and served in the military as well as serving as a Mason for over 50 years. Keith passed on knowledge and shared his experience with his children and friends. He was a man of few words but all action. Keith is survived by his beloved wife, Joann Ledsome of Early; sons, Gearold Ledsome and wife Billie of Lake Brownwood, Jeff Ledsome and wife Theresa of Brownwood, Mike Lesome and wife Laura of Odessa; grandkids, Nick, Lerin, Colin, Shelbi, Brad, Ally; 11 great grandchildren and one on the way; 4 sisters, Linda, Barbara, Mary & Sandra; 2 brothers, Jack and Johnny Ledsome. Keith was preceded in death by a grandson, US Marine Cpl. Craig Ledsome; sister, Shirley Ledsome; and his parents. In lieu of flowers the family has requested donations be made to the wounded warrior project, https://www.woundedwarriorproject.org/donate Online condolences, tributes and memorials can be shared with family at www.heartlandfuneralhome.net

The family of Gearold Keith Ledsome created this Life Tributes page to make it easy to share your memories.

Send flowers to the Ledsome family.