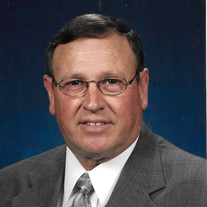 George Earnest Hullum was born July 24, 1939 in Baytown, Texas. He (narrowly) graduated Robert E. Lee High School in 1957, and at age 54 obtained a teaching certificate from Southwest Texas State University. George also loved to say he graduated from the school of hard knocks. As a teen, he loved working on and racing cars and was well known by the Baytown Police Department. He eventually moved to Odessa where he met Elsie Womack. George claims he swept Elsie off her feet, but Elsie says it was the '57 Ford that caught her eye. They were married for 60 years. Cars were truly his life. He worked for Porter Earnest Buick in Odessa before starting his own automotive business. The family moved to Brownwood in 1976. With a desire to try something different, George sold real estate for a short time. After realizing he needed to stick with his passion, he opened Hullum Automotive. At age 51, he sold his business to "retire", then was recruited to teach auto mechanics at Comanche High School. There he passed on his passion for cars to his students. After 12 years of teaching, he retired again to spend more time with his cows and be full time "Pop" to his grandkids. George was active in the Driver Cemetery Association. Heartland Cruisers, and a long-time member of Austin Avenue Church of Christ. His close friends called him Superman, and knew that Big George could fix anything. George Hullum died on Wednesday, September 8, 2021 at the age of 82. He was preceded in death by parents Vassar Lee and Mildred (Allen) Hullum; + siblings Joann, David, and Donnie. George is survived by wife Elsie; daughter Liz Compton (Jason Chadwell), son Rick (Laura) Hullum, grandchildren Kayla (Drew) Davis, Kyle Compton, and Holli Hullum; great-grandson Tye Davis; numerous nieces and nephews. The family will receive friends at the Austin Avenue Church of Christ on Monday, September 13, 2021, from 4:00 until 6:00 PM. A Celebration of Life will follow beginning at 6:00 PM under the direction of Heartland Funeral & Cremation Service.

The family of George Hullum created this Life Tributes page to make it easy to share your memories.

Send flowers to the Hullum family.