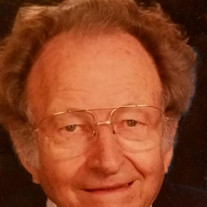 NIEMANN, GEORGE WILBERT Born January 18, 1932 in Priddy, Texas to George Niemann and Henriette Dorothy Lippe Niemann, George went home to be with his Lord and Savior Jesus Christ on December 12, 2020. He grew up in Priddy, a small, close-knit farming community that his great-grandfather Gottlieb Georg Niemann, a German immigrant, had helped to settle. As George discovered while researching his family’s history, his German ancestors attended the first Lutheran church established in their region of Germany following the Reformation. He always reminded his family that Gottlieb Niemann’s faith that the Lord would provide for him when he immigrated to America was realized when Gottlieb was able to purchase 2,000 acres of land in Texas, and that God still provides for our generation today. Though his mother died when he was only 10, George and his siblings were surrounded by loving relatives who all lived nearby and attended the Zion Lutheran Church, which Gottlieb Niemann had helped to charter. His large extended family gathered nearly every Sunday after church for a potluck lunch, usually outdoors. Shortly following his mother’s death, he accepted Christ as his personal Savior. At age 14, he memorized Martin Luther’s small catechism for his confirmation, and an aunt told him he ought to be a preacher. Growing up on a largely self-sufficient farm required hard work; George was picking 100 pounds of cotton a day at the age of seven. As a young teenager, he took pride in his first paying job working on a threshing crew, which was generally considered a man’s work. Farming not only taught him how to keep food on the table during the Depression, it also gave him a lifelong love of the land and appreciation for God’s grace provision. Because the family maintained their own farm equipment, George acquired the ingenuity to tackle mechanical problems and create his own solutions. He credited that experience with preparing him for his career as an innovative electrical engineer. After serving two years in the U.S. Army where he was trained in electronics and became a radar instructor, George worked at Convair Aircraft Company in Fort Worth, which was building B-36 bombers. That job and the G.I. bill helped fund his college education, which began at Texas Christian University and then culminated at Southern Methodist University, where he obtained his degree in electrical engineering. During George’s 35-year career at Texas Instruments, he was honored to work under Jack Kilby, the inventor of the integrated circuit. He developed numerous patents for defense applications, such as integrated circuits for NASA, and a submarine detection system for the U.S. Navy which earned him the title of TI Fellow. After retiring from TI, George became interested in learning the Biblical languages and completed a 4-year Master of Theology degree from Dallas Theological Seminary while in his 70’s. He shared his Bible knowledge with the Men’s Bible Class he taught at Wilshire Baptist Church in Dallas for 20 years and later with his teachers and fellow believers at First Baptist Church Dallas. Not one to be idle in retirement, he and his wife traveled to the sites of Paul’s missionary journeys and followed the steps of Martin Luther in Germany. From his research, he wrote several books about how Jesus Christ controls history and about the Protestant Reformation. He also combined his engineering experience with his knowledge of geophysics and Bible history to develop several intriguing projects, one of which proposes a new theory of orogeny, or mountain building, based on Noah’s flood. Out of this came a technology for oil and gas retrieval that was patented in 2017 and may yet significantly improve oil and gas recovery technology. Once again, the Lord put George where He needed him as a problem-solver following the Biblical mandate to “subdue the earth.” While at TCU, George met a smart, beautiful co-ed named Joanne Kirkpatrick. In 1959, he made her his bride, and she spent 61 years at his side. He was a wise and loving father to his son John Karl, son George Andrew and wife Pamela, and his daughter, Laura Anne Hatch and husband Greg. A special place in his heart was reserved for his grandchildren, John Gregory Hatch, Elizabeth Anne Hatch, and Lily Grace Niemann, who lovingly knew him as “Papa.” George’s foremost desire was that his children and grandchildren would learn Bible doctrine and fulfill God’s plan for their lives. He shared with them his love for the family farm in Priddy, and many wonderful memories have been made there. As they say, “still waters run deep,” and though George was a man of few words, when he did speak, it was something worth hearing. He walked with the Lord all his life, demonstrating integrity, humility, grace, and dignity and providing a godly example to everyone who knew him. His family and friends were blessed to be a part of his life, and he will be deeply missed. A graveside service in celebration of George’s life will be held at 2:00 p.m. on Thursday, December 17, 2020 at St. John’s Cemetery in Priddy, Texas. A memorial service will be held in Dallas at a later date.

NIEMANN, GEORGE WILBERT Born January 18, 1932 in Priddy, Texas to George Niemann and Henriette Dorothy Lippe Niemann, George went home to be with his Lord and Savior Jesus Christ on December 12, 2020. He grew up in Priddy, a small, close-knit... View Obituary & Service Information

The family of George Wilbert Niemann created this Life Tributes page to make it easy to share your memories.

Send flowers to the Niemann family.