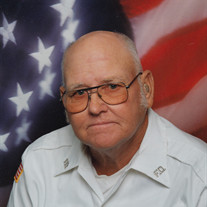 Gerald Johnson, age 84 passed from this life on Thursday, August 27, 2020. A visitation will be held on Monday, August 31st from 6 to 8 PM at Heartland Funeral Home in Early. Funeral Service will be held at 1:00 PM on Tuesday, September 1st in the Heartland Funeral Home Chapel with interment to follow at Bangs Cemetery. Gerald Johnson was born on October 12, 1935 to Ceburn Johnson & Maggie Calder Johnson at Stumps Hospital in Brownwood, Texas. He lived most of his childhood in Early, Texas where he attended school and became a boy scout. As a young adult he worked with his father Ceburn as a wrecker and gravel truck driver and turned the skills he learned into a career as a truck driver and heavy equipment operator. Gerald met his future bride, Patsy LaNell Beeman, when they were just kids living across the street from her. They married on December 22, 1967 and the union brought them two beautiful children, a daughter Judy and a son Donald. Gerald went to work for M.E. Ruby Jr. Inc. in 1970 and eventually moved to Austin, Texas with this job where he worked for 24 years. In September 1996, Gerald and Patsy moved back to their childhood home of Early, Texas. He worked for Kelcy & Sons Paving as a truck driver until he retired in 2015. During this time, in 1998 Gerald joined the Early Volunteer Fire Department and proudly served the community of Early and Brown County until he retired from there in 2018. Gerald was a lifelong member of the Brownwood Primitive Baptist Church and was a Deacon. His beloved, Patsy, passed away in 2013 and people would ask him if he had a girlfriend, and he would always say, “Nope, but I have a lot of sweethearts!” His sweethearts were the waitresses of the Red Wagon, the girls at City Hall, and the scale operator at Vulcan. Gerald is survived by his two children, Judy Lamb of Early, Texas and Donald Johnson of Palm Coast, FL. Six Grandchildren, Perry and Cassandra Lamb of Fort Worth, TX, Elizabeth Lamb of Brownwood, TX, Wesley Johnson and fiancée Kendra of Pflugerville, TX, Bradley Johnson of Austin, TX, Marine Recruit Riley Johnson of Palm Coast, FL, and CJ Lamb of Brownwood, TX. Four Great-Grandchildren, Adalynn and Abbigail Lamb, Allyanna Ramos, and Carson Johnson. Two brothers, Gene and Glenda of Joshua, TX, Johnnie and Mildred of Everman, TX and Sister, Louise Singleton of Crowley, TX. He is also survived by numerous nieces, nephews and cousins. He was preceded in death by his beloved wife, Patsy, his parents, Ceburn and Maggie, his brother in-law Harvey, and son in-law Michael. The family requests that in lieu of flowers that donations be made in Gerald’s memory to the Early Volunteer Fire Department, PO Box 3100, Early, TX 76803.

Gerald Johnson, age 84 passed from this life on Thursday, August 27, 2020. A visitation will be held on Monday, August 31st from 6 to 8 PM at Heartland Funeral Home in Early. Funeral Service will be held at 1:00 PM on Tuesday, September 1st... View Obituary & Service Information

The family of Gerald Johnson created this Life Tributes page to make it easy to share your memories.

Gerald Johnson, age 84 passed from this life on Thursday, August...

Send flowers to the Johnson family.